'Make some noise' - It's time for the Phoenix Open 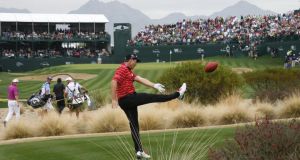 Pádraig Harrington punts a football into the grandstands on the 16th hole during the final round of the Waste Management Phoenix Open. Photograph: Hunter Martin/Getty Images

Standing on the 16th tee at TPC in Scottsdale, Pádraig Harrington went through his pre-shot routine, addressing the situation before taking a couple of carefully-measured steps back. Then, he ran with his head down and put his right foot through the American football being teed up by his caddy.

All 20,000 people in the bleachers went berserk as it sailed over their heads, the television commentators lauded how far the novice managed to kick it, and the most storied hole at the Phoenix Open gained another entertaining addition to its highlight reel.

There are much more hallowed venues in golf. There are certainly much more challenging holes than this 162-yard par-three.

But there is something very unique about this peculiar corner of the Arizona desert that the organisers rather grandiloquently dub “The Coliseum”.

The comparison is not that much of a stretch. Those who fail to reach the green and/or refuse to interact with the crowd when they do get there, are routinely slaughtered, mercilessly booed and savagely heckled throughout their visits.

Those who play well and play up to the audience get treated a whole lot better by fans who come prepared to laud and to lambaste in equal measure. They research each golfer’s biography in advance so they know the names of their high schools, colleges, hometowns and even their favourite sports teams. All the better to be able to shout something that will, good or bad, resonate with the player once he emerges from the tunnel that opens out onto the rowdiest tee-box in golf.

Depending on the raucous circumstance, spectators can boo a beloved local like Phil Mickelson (he used to live nearby) for making a dull par but serenade an English Ryder Cup stalwart they usually love to hate. Indeed, perhaps nothing captures the madness better than the bizarre sight of Ian Poulter, five thousand miles from North London, conducting a chorus of beery Arizona frat boys as they lustily chanted “Are - sa - nal! Are -sa -nal! Are - sa - nal!”

With a flashing video screen urging fans to “make some noise” this may be as far removed from the Masters as you can possibly get while remaining in the sport of golf. It’s difficult to imagine the men in the green jackets down Magnolia Lane signing up Kid Rock to headline a concert on the Friday night of their tournament. Indeed, when tickets for that sold out in record time, the Phoenix Open added another gig by Darius Rucker (formerly of Hootie and the Blowfish) for next Thursday evening.

In the middle of the extended frat party, the old joke goes, a golf tournament, sponsored appropriately enough by a company called Waste Management, often breaks out.

Against that background, it’s perhaps understandable that organisers have tried to damp down the festivities a tad. At the Sony Open in Hawaii last week, golfers were made aware of a crucial rule change in Arizona.

“At this year’s Waste Management Phoenix Open,” read a notice in the locker-room, “for fan safety reasons, players and caddies are prohibited from throwing, kicking or otherwise propelling items into the crowd on the 16th hole.”

That one player soon scrawled “are you kidding me?” above the sign was telling. Part of the appeal of Phoenix has increasingly been the way those inside the ropes have shown their appreciation for the manic nature of the galleries outside them. Armed with swag from their sponsors and keen to get the crowd onside, players have fired everything from sunglasses to caps to footballs (Harrington did some punting too) into those stands that are situated to amplify the noise and offer surround sound.

“We play a lot of golf events throughout the year,” said Harrington last year. “And not taking away from any event but Phoenix is unique and there is nothing like it in golf. It’s a party atmosphere and for a professional player, I have been out here a long time, it’s nice to see something different. I really do enjoy that. I think golf shouldn’t be the same every week. You know, it’s definitely different. You’ve got to look forward to it and embrace it, but I’ve got to say golf should be more fun, and they certainly do fun in a big way.”

Not in as big a way as they used to. Two years ago, in another attempt to curb the enthusiasm for ancillary activities that differentiate this tournament from all the others, they banned the caddy races which had become another traditional rite at the 16th. Much like the latest prohibition on throwing merchandise to the galleries, safety reasons were cited for ending what had become a hugely popular and utterly carnivalesque sideshow.

It’s not all decorum and proper etiquette just yet however. There is still an artificial beach on the course where fans can lounge in their deck chairs, hang in their purpose-built cabanas, and in the case of one inevitably inebriated spectator last year, maybe try to swim across the pond. He was hauled away by the police who, for convenience, and in recognition of the fact this is a little more rock and roll than your usual tournament, keep a holding cell on the course.

“It’s a pretty gutsy move for Tiger to show up there,” said former professional David Feherty, recently. “There’s a lot of distractions. We’ll see how well Tiger’s doing physically and if he can get through that week in a strong frame of mind. It’ll be general debauchery.”

Woods hasn’t played Phoenix since 2001 and a lot of people assumed his prolonged absence had much to do with a lack of desire to play in front of boozed-up crowds, notorious for preying on individual’s weaknesses. What they might have shouted at him in the immediate aftermath of his marriage break-up doesn’t bear thinking about. His return coinciding with the revamped rules of engagement between fans and players has even prompted an outlandish conspiracy theory about organisers trying to create a more sedate environment at his special request.

It’s not like he and the TPC don’t have some colourful history. When he hit a hole-in-one on the 16th in 1997, the ground allegedly shook beneath their feet. Two years later, his tee shot on the par-five 13th went left, came to a stop by a boulder that was going to prevent him from properly swinging the club, and prompted controversy. After getting an official to decree that this monstrosity constituted a “loose impediment” that could be moved, Woods enlisted volunteers from the gallery to help him do so. The one-tonne rock was ushered out of the way in a comical scene that his detractors regarded as seriously bending if not quite breaking the rules.

That wasn’t even the oddest thing that happened to him that year. When Scottsdale police went to apprehend a 40-year-old man who had been aggressively heckling Woods throughout his round, they discovered he had a loaded semi-automatic shotgun concealed in his fanny pack.

If that unnerving detail should help us understand why Phoenix has not featured in his schedule for 14 years, Woods is going back now for purely golf reasons. Where better for his first tournament of the year than a set-up that traditionally yields easy birdies and low scores? He needs to play more before Augusta, is apparently determined to not just revisit those comfort zone courses where he had so much success, and maybe also wants the unique challenge posed by trying to find his form amid the most animated (a fancy word for drunk) fans in the sport.

“It will be great to return to Phoenix,” said Woods. “The crowds are amazing and always enthusiastic.”

Whether he’ll be speaking in such glowing terms after next week remains to be seen.