Lowry hoping next three weeks will transform his season 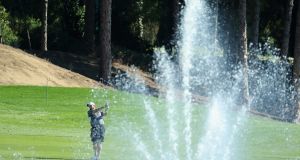 Shane Lowry, in black shorts, is on the range with driver in hand. Pádraig Harrington is behind him, with mobile phone on camera mode; a videographer of a kind, capturing Lowry’s actions. The smooth swing unleashes venomous power which propels the ball to the far end of the practice ground. It doesn’t need any playback to tell everyone that there is absolutely nothing wrong with his driving.

This is week one of what Lowry hopes will be a three-week stint that carries with it the potential to transform his season. With over €6 million in prize money at this Turkish Airlines Open here at Regnum Carya resort, Antalya, and loads of world ranking points, the 30-year-old Offalyman knows this limited-field, no-cut tournament offers a chance to take care of business.

He’s also in the field for next week’s Nedbank Championship, but is not yet qualified for the season-ending DP World Championship. He wants to make it to week three.

Golf is a numbers game, and the numbers don’t lie in reflecting what has been a disappointing season for Lowry. He’s 62nd in the Race to Dubai rankings (only the top 60 available players make it to the season’s finale in the desert) and he’s 93rd in the latest world rankings, having started the year in 43rd. As of now he’s not into any of next year’s WGCs nor the US Masters.

“Am I happy with the season? Obviously not. But I’ve got three weeks now to try and rectify that. I feel I can do something. I’m happy with where my game is at,” said Lowry.

In a way this feels like a rescue mission of sorts. At the start of the year Lowry would have entertained hopes of aiming for the Race to Dubai title itself and not being a bit player. Now his target is more modest.

“I feel like I can do something the next few weeks...if I ended up having three good weeks and didn’t win I wouldn’t be too disappointed. I’d like a win, for sure. But I want to finish as high up the Race to Dubai as I can, inside the top 30 would secure me a place in the Open next year.”

Lowry has fallen between two stools this season, where the challenge of juggling schedules on both the PGA Tour and the European Tour has taken a toll on body and mind.

And that is the reason why he has committed moving his family – wife Wendy and daughter Iris – to Florida in January for a six-month stay which will enable him to focus on the PGA Tour.

“I’ve found when I go on three or four weeks’ trips I find it difficult being away so long, and that I don’t get that break away from the golf that I need. The way I’ve been doing it wasn’t sustainable,” said Lowry of making that commitment to rent a house and have a stable base stateside from January.

However, for now it is all about focusing on the Turkish Airlines Open which kickstarts the lucrative final series on the European Tour and to move up the order of merit and accumulate more world ranking points.