Lots of positives for Lowry as Fitzpatrick takes title 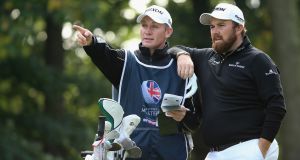 Shane Lowry stands with his caddie Dermot Byrne during the final round of the British Masters at Woburn Golf Club. Photo: Andrew Redington/Getty Images

If a cold putter led to a large dose of frustration for Shane Lowry, there were still many positives for him to take away from a runner-up finish to Matthew Fitzpatrick - the Englishman securing a breakthrough win on tour - in the British Masters at Woburn. The Offalyman took home a cheque for €300,464 which enabled him to move up to fourth in the latest Race to Dubai standings and close the gap on leader Rory McIlroy.

Fitzpatrick - a former world amateur number one and past winner of the US Amateur - shot a final round 68 for 269, 15-under-par, to claim a two stroke winning margin over the chasing trio of Lowry. Soren Kjeldsen, the Irish Open champion, and Fabrizio Zanotti and secure a maiden tour title in holding off his pursuers down the stretch.

Unfortunately for Lowry, a second tour win of the season evaded his clutches. Although he played superbly from tee to green, his putter remained cold for much of the round and there was an ironic raising of the club to the skies when he sank a 10 footer for birdie on the 17th. He knew, though, that it was too little too late.

“It was another good day of playing good golf but holing nothing. Woeful putting is the only way to put it,” remarked Lowry of how he just came up short of his quest to add the British Masters title to the WGC-Bridgestone Invitational he won so impressively back in August. “I holed pretty much nothing all week. I was hitting it inside 10 feet a lot and not making them. It is just frustrating, hard to take. I lost confidence on the greens.”

Lowry, who finished with a closing 67 for 271, a card which included five birdies and a bogey, did however impact on the order of merit. In taking home a cheque for €300,464, he moved to fourth on the Race to Dubai standings -bringinig his season’s earnings to €2.45m and closing the gap on McIlroy to €557,252 - and will take momentum with him in the coming weeks as he moves into the Final Series on the European Tour.

In deciding to miss this week’s Portugal Masters, Lowry intends to return to tournament action at the Turkish Airlines Open in three weeks time - and will play four events in successive weeks, taking in Turkey, the two big money events in China, the HSBC Champions and the BMW Masters, before moving on to the tour finale at the DP World Tour championship in Dubai.

The rebirth of the British Masters - back on the schedule for the first time since 2008 - also provided good paydays for Paul Dunne, just a month into life as a professional, and Niall Kearney. Dunne closed with a final round 68 for 278, six-under-par, to finish alongside Irish PGA champion Kearney in tied-25th. Dunne and Kearney both earned cheques for €39,487, whilst Graeme McDowell - who endured a tough finish with a run of three successive bogeys from the 12th compounded by a double bogey on the 17th - finished with a 72 for 279, which left him in tied-30th.

Fitzpatrick, just 21 years of age and the youngest player in the field, became the youngest winner on tour this season. The Englishman - who had previously had four top-three finishes this season, bogeyed the third hole but hit back with five birdies to claim the first prize of €671,549.

“”This year my goal was to keep my card, and to be honest, I wasn’t sure I was going to be able to do that after the start of my year. But I managed to start playing well and making more cuts and just picking up cheques, and then the past two months, I guess, I really got going. I made a lot of money and was able to secure my card in The Race to Dubai. It’s great,” said Fitzpatrick.

An announcement is expected from the European Tour that next year’s Irish Open will be played on at The K Club, celebrating the 10th anniversary of the Ryder Cup’s staging there and also of owner Michael Smurfit’s 80th birthday.

Tom Murray holed two massive putts at the 18th, one in regulation play and one on the second play-off hole, to secure a dramatic maiden European Challenge Tour title at the Volopa Irish Challenge hosted by Mount Wolseley Hotel Spa and Golf Resort.

The Englishman, the son of former European Tour winner and Senior Tour player Andrew, proved that a steely winning mentality runs in the blood as he defied the odds to emerge victorious, before dedicating the victory to his girlfriend - captain of Great Britain’s Wheelchair Basketball team Sophie Carrigill.