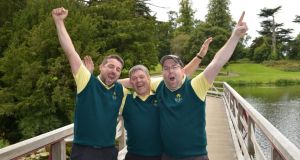 As battle-hardened as he has become, Colin Fairweather - the shamrock emblem on the side of his cap indicating proof of his status as a current Irish international - followed the line of his three foot par putt on the 18th and, as the ball dropped to the bottom of the tin cup to ensure Knock’s victory over Limerick in the semi-final of the Senior Cup at these AIG Irish Cups and Shields Finals, he produced a clenched fist that punched the air.

The body language of Fairweather’s reaction to the winning putt said it all, of what these club competitions mean.

“What more could you want?” asked Fairweather, who claimed the critical point with a one hole win over a game Seán Poucher to go with victories secured by Mark McMurray and James Patterson that gave the Belfast club a 3-2 success and a date with Maynooth University in the final. For Limerick’s Pat Murray, a former Irish Close champion, it proved to be a fifth team defeat at the semi-final stage of a national competition, three Senior Cups and two Barton Shields.

One thing is for sure, a new name will be engraved on the most famous and coveted trophy. Maynooth - the new kids on the block - demonstrated the strength of their squad, effectively fielding a B team whilst the A team are away competing in the European Universities, with a 4-1 victory over Athlone. The Paddy Harrington Golf Scholarship programme has certainly guaranteed a conveyor belt of talent. “We’re blessed with a lot of talent,” admitted Maynooth non-playing captain Donal Scott.

Fairweather, for his part, had to grind it out coming in. Having driven beautifully for most of his ding-dong match with Poucher, the Ulsterman pulled successive drives on the 17th and 18th. On the penultimate hole, fearing his ball was lost over the stone wall, he was about to reload when word reached him that the ball had been found in a bed of leaves. To his credit, with his body pressed against the wall, he advanced the ball some 160 yards and salvaged a par which halved the hole and retained his one hole lead.

And, again, on the 18th, a pulled drive - which kicked left - evaded the heavy rough by a matter of inches and he managed to reach the back of the green in two. First to putt, he the ball some three feet short and then watched as Poucher’s 12 footer for birdie to extend the match shaved the hole. Fairweather completed the job by rolling in the par putt.

Victory for Thurles in the Pierce Purcell Shield was a family affair - with Tommy Quigley and his two sons Steve and Shane on the winning team that defeated Gort 3 ½ - 1 ½ - but one very much tinged with emotion. All the Thurles players wore black ribbons in memory of Vinny O’Brien who had played on the team which won the Munster final but who tragically died from a heart attack last month.

“He was the life and soul of us,” said Tommy Quigley, with his son Steve remarking: “This is for Vinnie. This is for him and his wife. This is what we wanted from day one and without him, we really wanted this (win) today.”

As it happened, the Quigley brothers - unbeaten in all nine matches through the campaign - sealed the deal with a 4 and 2 win over John Moylan and John Tierney which had an anti-climatic finish when the Galwaymen put two balls into the water on the Par 3 16th.

Henshaw the only change as Andy Farrell names Ireland team for Paris 12:41
Warren Gatland: England players could miss Lions tour if not released for Japan warm-up 12:19
LA Dodgers land World Series to end 32-year drought 08:38
MCG could welcome 25,000 fans for Boxing Day Test 08:21
Gordon D’Arcy on a Halloween thriller; Will an empty Hill derail the Dubs? 07:51
Here is your handy guide to sport on television this week