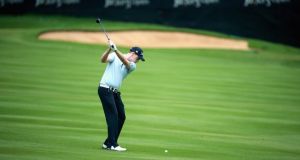 Ireland’s Kevin Phelan plays his second shot into the 18th green during the second round of the Joburg Open at Royal Johannesburg and Kensington Golf Club. Photograph: Warren Little/Getty Images

Waterford golfer Kevin Phelan put himself in a strong position at the Joburg Open, carding a four-under 68 to move to eight under and within four shots of leader Wallie Coetsee at Royal Johannesburg and Kensington Golf Club.

Phelan, playing the tougher East Course, started and closed with back-to-back birdies and sits in a tie for 11th spot going into the weekend action.

Coetsee hopes his daughters will be able to follow his progress this weekend, even if it means having to watch on a neighbour’s television.

Coetsee revealed he does not own a TV after adding a 65 to his opening 66, his 12-under-par total giving the world number 509 a one-shot lead over fellow South Africans Garth Mulroy and Tjaart van der Walt and England’s Simon Dyson.

“When we moved to Jeffreys Bay two and a half years ago, we decided to get rid of our television,” Coetsee said. “So if Zoe and Kelly want to watch, I hope my wife Ashley takes them to a friend’s place.

“Life is so much simpler, especially without television. We’re in bed early and we read a lot of books. And we’re up early, walking on the beach before we take the kids to school.

“I can also practice early and I play out at Zwartenbosch Golf and Lifestyle Estate. It’s quiet there. I have the nine-hole course to myself on Mondays and Tuesdays, there are competitions on Wednesdays, and I have it to myself again on Thursdays. It’s like I’ve got my own course.”

Asked about leading one of South Africa’s biggest events, which also has three places in the British Open at St Andrews up for grabs, the 42-year-old added: “Somebody must wake me up; it feels like a dream.

“It would be great (to qualify for the Open), but that is a big bonus. First thing is to wake up tomorrow and enjoy this ride.”

Seven of the top 10 completed their second rounds on the harder East Course, including Dyson, who fired six birdies and one bogey in his 67.

Dyson has won six times on the European Tour but missed the cut in his first three events this season and has a best finish of joint 50th so far in 2015.

“I didn’t play as good as yesterday, but I scored pretty well,” he said. “I made four birdies on the front nine and I birdied the par fives. If you get your drives away then they’re all pretty good chances.

“There was some luck. I got fortunate on 10; I pushed my drive down there and managed to get a shot, hit to about three feet and knocked that in, which was a bonus. It was a good day and I was very happy with the score.

“It’s been a while since I’ve been up there. I’ve been playing all right, but at the beginning of the season I changed my irons and they were costing me dearly. I didn’t have a clue how far they were going.

“This is the first week I’ve put my old set back in the bag and all of a sudden I’m hitting it pin high again; that makes a heck of a difference.”

Mulroy and Van der Walt recorded scores of 68 and 69 respectively to join Dyson on 11 under, with former Ryder Cup player Niclas Fasth and England’s Anthony Wall a shot behind.

A flawless 63 from Alex Noren, the lowest score of the day, lifted the Swede into joint seventh on nine under with 10 players a shot further back on a crowded leaderboard.

Peter Lawrie struggled on the East Course, carding a two-over 74 to miss the cut by shot after finishing on three under.

Gareth Maybin also missed the cut after a two-over 73 on the West Course saw him finish on one under.

European Ryder Cup captain Darren Clarke could only card a second consecutive 72 to miss the cut by five shots on on over.