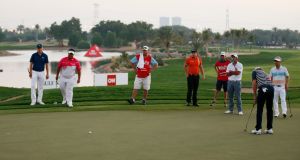 Jordan Spieth (L) finished his third round in Abu Dhabi playing in a six ball due to bad light. Photograph: Reuters

Two days after receiving a warning for slow play, world number one Jordan Spieth won a race against time to reignite his bid for victory in the Abu Dhabi HSBC Championship.

In an extraordinary finish to the day’s play, Spieth completed the final hole of his third round alongside five other players in near-darkness in order to avoid an early return to Abu Dhabi Golf Club on Sunday.

Spieth knew he could play the ninth if just one member of his group teed off before the siren sounded to suspend play, and the 22-year-old did so with seconds to spare as the group in front stood aside.

The Masters and US Open champion then made par alongside playing partners Soren Kjeldsen and Pablo Larrazabal, as well as Eddie Pepperell, Kiradech Aphibarnrat and Tyrrell Hatton in an unofficial “six-ball”.

“We got up there and didn’t really know if there were any rules around us, who tees off first. We let them tee off first and I was first to tee off (in his group) and as I struck my shot, the horn blew. We were all very, very relieved to have that happen. It saved us about five-plus hours in arriving to the course tomorrow.

“We were all asking the guys in front of us, if you guys want to, just go finish and we’ll play behind you, that’s the way it’s supposed to be. They didn’t really mind, plus Eddie’s ball was picked up and so they had to wait a while in the fairway. They didn’t care at all. They’re good guys.”

Asked if he appreciated the irony after being given a monitoring penalty for slow play on the eighth hole on Thursday, Spieth added: “How about that?

“I even asked one of the officials on number seven green, I said, ‘Would you guys mind at least giving us a five-minute warning when the horn is going to blow,’ because it’s blowing earlier than it is in the States.

“I’m just fortunate that ball got in the air. Very easily could have waited another 10 and we’re standing on the ninth tee.”

Spieth might have made it comfortably if not for England’s Andy Sullivan — who was in the final group on the other side of the draw — getting into trouble on the ninth.

Sullivan had been two shots clear before losing a ball in a bush and the resulting triple-bogey seven dropped the 28-year-old to nine under par.

Playing partner McIlroy had recorded three birdies and a bogey on the front nine after earlier boosting his chances of a first win in Abu Dhabi after four second places in the last five years with a spectacular finish to his second round.

McIlroy had been one over par for the 13 holes he completed on Friday and looked set for more frustration after missing early birdie chances, but then almost holed his approach to the last two holes to leave tap-ins for a birdie and an eagle.