Australian still the man to catch at the BMW Championship 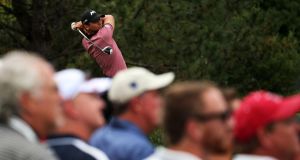 Jason Day: “I should’ve got to 19 under. That would have been nice!”

Red-hot Jason Day extended his lead and continued to dominate the golf world as he stormed five shots clear after the second round of the BMW Championship at Conway Farms Golf Club. The Australian world number three backed up his opening 61 with an eight-under 63, including a 43-foot eagle putt at the last, to rocket to 18 under 124 in the third of the PGA Tour’s four FedExCup playoff events.

Day tied the PGA Tour record for the opening 36 holes as he built a commanding five-stroke advantage over Americans Brendon Todd and rookie Daniel Berger. Todd holed out from the fairway for an eagle at the par-five 18th for a 63 of his own while Berger fired a 64 to post a 13-under total of 129. World number two Jordan Spieth, who played with Day for the first two rounds, was a further two shots back after finishing birdie-eagle for a 66, level with fellow American Kevin Na (66).

Rory McIlroy, the man Day will usurp as number one with victory, is a further two shots behind after he climbed the leaderboard with a round of 65.

Earlier, Day fell short in his bid for a record-equalling 59 in the weather-delayed opening round when he failed to hole out a 44-yard chip shot from the right rough, then missed a nine-foot birdie putt. But the disappointment did not last long as he went back out and once again destroyed the Conway Farms course with seven birdies, an eagle and just one bogey.

Day is now a mind-boggling 97 under par for his last 26 PGA Tour rounds. The Australian is searching for a fourth win in six starts and world ranking officials have confirmed he will rise to number one for the first time if he wins this week’s tournament.

“I should’ve got to 19 under,” Day, who is seeking his fifth win of the season, joked after his round. “That would have been nice.”

“It’s over now,” Day said of his first 36 holes at Conway Farms. “I’ve got to look ahead to tomorrow’s round now.”

Spieth spent two days as one of Day’s playing partners (along with Rickie Fowler). Spieth shot 65-66 and is at 11 under, good enough for a tie for fourth. But he’s 7 shots behind Day.

“I feel like I should be paying to watch this event,” Spieth said.