Jack Hume in contention after slow start at Carnoustie 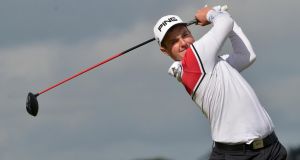 Jack Hume was one over par after six holes in the first round, but moved up several gears and recovered with three birdies and an eagle. Picture by Pat Cashman

Jack Hume leads the Irish charge going into the second and final qualifying round of the Amateur Championship in Scotland.

The 20-year-old former West of Ireland champion from Naas fired an excellent four under par 68 at Carnoustie to sit on the heels of the pacemakers after round one.

One over par after six holes, Hume did not appear to be in too good a position but he then moved up several gears and three birdies and an eagle recovered the situation – and he is now poised to book a spot in the match-play draw.

Belvoir Park’s Gareth Lappin also played on the tougher Carnoustie links and posted a one under par 71 to keep himself well in contention to go through.

Three birdies on the bounce were crucial for Lappin but he stumbled with bogeys on 15 and 18 to add an inward half 35 to his outward 36.

Another Northern Ireland man, Colm Campbell of Warrenpoint, returned a level par 70 on the neighbouring Panmure course witgh levels halves of 35, finishing with a bogey five, and Conor O’Rourke of Naas recorded the same score after bogeying two of the last four holes.

Dubliner Gavin Moynihan, tghe Walker Cup who plays out of the Island was one over par 71 at Panmure after finishing with back-to-back bogeys while Tullamore’s Stuart Grehan also posted a one over par but his was a 73 at Carnoustie – he dropped strokes on two of the last three holes.

Portmarnock’s Geoff Lenehan and Alex Gleeson were very disappointed with their 72s at Panmure.

Paul Dunne, one of the most experienced Irish players, from Greystones will have to move up several gears today after a lack-lustre 73 at Panmure which included four bogeys and just one birdie.

But the real disappointment of the day was the poor display by Cormac Sharvin who has been doing really well this season. He slumped to a 76 at Carnoustie and will need a major transformation today if he is to qualify.

Sharvin, the former Irish champion from Ardglass had three bogeys in the first four holes and two in the last three.

Alfie Plant from Sundridge Park leads after the first round with a seven under par 63 at Panmure with Scotland’s Grant Forrest and New Zealander Ryan Chisnalljust behind after five under par 67s at Carnoustie.