‘It’s easy to think of what might have been’ 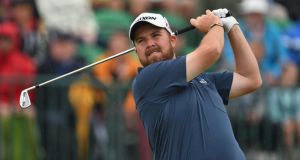 Shane Lowry tees off during the third round of The 143rd Open Championship at Royal Liverpool in Hoylake, England. Photo: Stuart Franklin/Getty

I was at the dentist on Tuesday for some root canal treatment which, as anyone knows, isn’t exactly the sort of thing you ever look forward to. The problem with the tooth actually started in England last week, before the Open Championship, and I even considered taking a flight home to see my own dentist it was that bad.

In the end, we found a local dentist who put a dressing on it, prescribed anti-biotics and gave me painkillers. Thankfully, it got me through. And what a week!

I managed to achieve my best-ever finish in a Major – in tied-ninth – so far; and Rory McIlroy again showed that when he brings his A-game to the table, there is nobody who can live with him. He’s close to unbeatable.

I didn’t actually get to see the end of the golf in Hoylake. I love being able to get home on a Sunday night if in any way possible, so didn’t hang around too long after finishing my own round.

We got back to the rented house, watched a bit of the golf on television – up to Sergio taking two to get out of a bunker which effectively sealed his fate – and then kept checking the scores on the way to the airport. By the time we got our eight o’clock flight, Rory was over an hour into all of the demands that come with being the champion.

To be honest, I think the real winning of it for Rory came with those two late eagles in Saturday’s third round. I’m sure it’s not going to be his last Claret Jug or the last Major he is going to lift. He is the best golfer I have ever played with.

I was meant to play golf with Brian O’Driscoll on Tuesday evening but that plan unfortunately had to be shelved for another day.

Instead, I was at the dentist for the root canal work and then I stayed down for the night with my parents.

My mam had recorded the golf from Sunday and I watched the back nine. It’s nice to sit down, sit back and rewatch events, knowing the way they’re going to turn out.

You know, it’s easy to think of what might have been. It’s only natural to think that way. I was on the wrong end of a lopsided draw. I had those two doubles in a row in Friday’s second round. But for that, it could have been a lot different. But that’s the way it is.

Every week you play golf and finish near the top of the leaderboard, you think of what could have been. Except, this was the biggest championship of the season.

Last week the draw had a major part to play. Myself and Adam Scott were the only players from our side of the draw who finished in the top-20. It was definitely a three to five shot difference.

In saying that, to finish where I finished coming from that side of the draw shows how well I played. It proved to me that I can really compete at that level. And I played as well as anyone over the weekend. I have momentum to take with me.

I’m not one usually to look back at the stats after a tournament but I know I was near the top in the number of birdies. That’s just the way I have been playing. In Munich. In Scotland. In Hoylake.

I’ve also got the confidence in knowing I can shoot a 65 on the Sunday of a Major, and that’s pretty special no matter where you are on the leaderboard. I was so in control of myself and enjoyed every minute of that final round. I want to keep that putter hot.

You could almost miss the cut from a situation like that because the back nine wasn’t playing easy.

I think it showed a lot of character to bounce back, to finish under par for the halfway stage and to give myself the chance to do what I did over the weekend in shooting nine-under-par, as good as anybody.

Unfortunately, I just missed out on the top-five finish that would have gotten me into next week’s WGC-Bridgestone Invitational in Bridgestone. Still, tied-ninth was a great result and, even more so, the score that I shot.

It means I am into next year’s Open at St Andrews. I love that course, and it also means it is easier to plan your schedule knowing you are into the big championships.

I’m not playing again until the US PGA at Valhalla. I talked with Conor Ridge and Colin Morrissey, my management team in Horizon, about maybe adding the PGA Tour event in Reno next week onto my schedule but we decided I’d be better staying here, particularly with the weather forecast so good, and preparing.

We were trying to look at the benefits of going to Reno and there weren’t too many. It’s a good tournament with a good purse but not too many world ranking points. I’m better off getting my focus on Valhalla really.

The other thing that I took from Hoylake was the quality that is continuing to come out of the GUI. I actually sent my coach Neil Manchip a text on the Monday before the recent European Championships saying the team was the best since 2007 when we won, a team that had Rory on board too, and they just lost out in the final.

He was very unlucky too to be on that side of the draw and he only came up two strokes short of making the cut.

He gave it a great go on the Friday with four birdies on the spin from the 13th. I’d heard before about him that he was good under pressure and that shows the talent and the guts that he has.

I’ll be heading out to Louisville on Sunday week and I’m looking forward to it. Everything is good. I’m driving the ball straight and long; my iron play has been very good the last couple of weeks, and if I can just keep my putter a little bit hot, you never know what’s going to happen.