Golfers can play on if precautions are taken, says England Golf 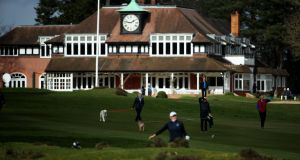 Golfers out walking and playing at Sunningdale in England during the coronavirus outbreak. Photo: Warren Little/Getty Images

People can continue to enjoy golf if players take precautions against the coronavirus such as not touching the flag or shaking hands at the end of a match, one of the game’s governing bodies has said.

Clubs already hit hard by a long, wet winter which caused courses to close for spells now face the reality of losing a core of their ageing memberships to self-isolation.

The timing of the outbreak could not have been worse for clubs, as many open their season in April and are currently asking golfers to renew their memberships.

While the professional game for men and women has shutdown, England Golf, the amateur game’s governing body, has advised that clubs can remain open if they make widespread changes to their usual way of operating.

In advice published on Wednesday, it said clubs and players must take appropriate steps to make sure they minimise the risk of infection, adding that the sport is a healthy pursuit played in the open air.

It said: “The risk to players, who are of good health and not classed in a vulnerable age category, is smaller than most other sports provided the expert advice is followed.

“The vast majority of golfers can continue to play at your facility.

“However, golf facilities must be mindful of the older age profile of their membership and understand that it is only prudent to implement sensible policies to limit the potential spread of any outbreak.”

Measures include telling players to keep a safe distance apart while playing, asking them not to touch the flagstick but to putt with it in the hole, and to curtail the indoor social events in the clubhouse.

It also said common courtesies in the game, such as handshakes at the end of a match, should cease.

It suggested: “Offering a thumbs up or some other form of friendly greeting should be used as an alternative.”

England Golf said it will offer more advice later to clubs about the help the Government has offered to small businesses.

Dan Murphy, editor of National Club Golfer, stressed these were already tough times for golf clubs, even before the coronavirus crisis, following a wet winter, and against a background of declining memberships as more people play on an ad hoc basis.

There were approximately 600,000 club golfers in England, with the average age around 60, so many of them will fall in the over-70 demographic who should be self-isolating.

He feared that hundreds of clubs could close if there was a sustained shutdown of the game.

Mr Murphy told the PA news agency: “There is a petition to ‘keep golf open’ with people pleading with the Government not to stop players during any lockdown.”

One chairman of a financially-hit club in northern England, who asked not to be named, said: “We are going to close our clubhouse soon, deep clean it and re-open later.

“What is happening across the country with the coronavirus is desperate, but while the course remains open, we can market golf as a safe, enjoyable sport which can continue where contact sports like football and rugby cannot.

“Golfers can still get outside for four hours of sport, as long as they don’t get too close together.

“We might end up offering short-term memberships, saying there are no clubhouse facilities for now but you can still play.”

Keith Duggan: Through the glories and the disgraces, we were all Maradona addicts 20:30
Manchester City cruise into last 16 with win in Greece 20:29
Rapid Vienna v Dundalk preview 20:27
Andy Farrell to delve deeper into Irish squad for team to play Georgia 19:42
Pele leads Maradona tributes: ‘One day, I hope we can play football together in the sky’ 18:38
Here is your handy guide to sport on television this week