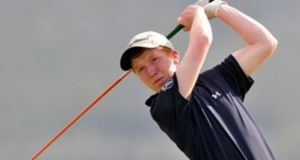 Irish duo Kevin Phelan and Gavin Moynihan have been selected on the Great Britain and Ireland team for the Walker Cup match against the USA being played at the National Golf Links of America in Southampton, New York on September 7th and 8th.

The 10-man team and two reserves were announced for the 44th Walker Cup match where the GB&I team will bid to defend the trophy they won in dramatic fashion at Royal Aberdeen in 2011.

The team includes England’s Matthew Fitzpatrick who won the US Amateur Championship, the first English player to do so in over 100 years. It is a great achivement for the 18 year old Moynihan from The Island and Phelan (Waterford Castle), four years his senior.

Nigel Edwards, Captain of the GB&I team, said, “We believe we have selected a strong team which includes some of the best amateur players in the world. The players have all competed at the highest levels of the amateur game and will relish the challenge of facing the Americans on their home soil.

“There will be some who are disappointed not to make the team but it is the job of the selectors to carefully consider the players available and select the strongest team they can. We are very much looking forward to what promises to be a great match next month.”