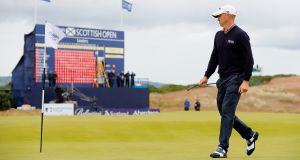 Alex Noren of Sweden walks on the 18th green during the final round of the AAM Scottish Open at Castle Stuart. Photograph: Kevin C. Cox/Getty Images

Ice-cool Swede Alex Noren held his nerve to clinch a fifth career victory on the European Tour by one shot at the Scottish Open in Inverness on Sunday.

Two strokes in front heading into the final round at Castle Stuart Golf Links, Noren was briefly caught in a tie at the top before pulling away with two birdies in the last seven holes to card a two-under-par 70.

The 33-year-old from Stockholm, who had been the 54-hole leader for each of his previous four wins on the circuit, posted a 14-under total of 274 to finish one ahead of England’s Tyrrell Hatton, who birdied the par-five 18th for a 69.

Graeme McDowell’s final round 71 left him nine under par overall - bogeys on the 15th and 17th holes cancelling out birdies on the first, sixth and 16th. Leaving him in a tie for 10th place. Padraig Harrington also signed off on a final round 71 - leaving him six under overall. Michael Hoey finished up with a round of 72 to go four over par in 70th place.

Belgium’s Nicolas Colsaerts closed with a 66 to share third place at 12-under with Italian Matteo Manassero (70) and New Zealand’s Danny Lee (69).

Colsaerts, Hatton, Manassero and Scotland’s Richie Ramsay, who tied for sixth after carding a 67, all earned themselves a place in next week’s British Open at Royal Troon via their top-12 finishes at Castle Stuart. (