Harman leads in Hawaii as Spieth steadies the ship 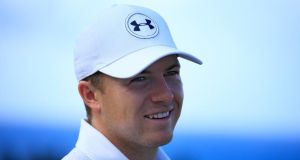 Jordan Spieth drained a 91-foot putt on his way to a 68 in Hawaii. Photograph: Cliff Hawkins/Getty

Brian Harman finds himself on the top of the tree in Honolulu after the second round — having been in a similar position in the Sentry Tournament of Champions on the islands last week.

The American climbed two places with his seven-under round of 63 to go three shots clear at 13 under for the Sony Open.

Starting on the back nine, Harman was three-under at the turn, and followed up with three birdies on the second, third and fourth.

The only blot in the book was a bogey on the seventh, but he finished with a flourish: sinking a 17-foot putt for eagle on the par-5 ninth.

Séamus Power is tied for 37th place after posting a second consecutive two under par round of 68.

Overnight leaders Chris Kirk and Zach Johnson both carded 67s and are tied for second place on 10 under, alongside John Peterson, Tom Hoge and Talor Gooch.

A trio of Americans — Patton Kizzire, Ollie Schneiderjans and Kyle Stanley — sit one shot behind them tied for seventh.

Jordan Speith’s round of 68 was a lot less eventful than Thursday’s where he hit a quadruple bogey.

He sits tied for 48th on three under, having carded four birdies and a pair of bogeys.