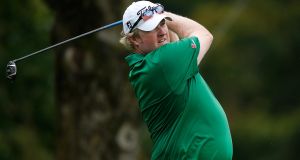 Canadian golfer Brad Frisch has been banned for three months after reporting himself for an anti-doping violation. Photograph: Gregory Shamus/Getty Images

Canadian golfer Brad Fritsch has been banned for three months after he reported himself to PGA Tour officials for violating its anti-doping policy, the governing body said on Monday.

The 40-year-old, who plays on the secondary Buy.com Tour and is eligible to return to competition on February 28th, said the banned substance was in a supplement he had been taking to assist weight loss.

“Mr Fritsch self-reported this information after discovering that an ingredient in a supplement that he was taking was on the prohibited list,” the Tour said in a statement.

“He has acknowledged his inadvertent error and accepted his suspension.”

Fritsch, in a Facebook posting, said his heart had “sank” when he realised that one of the supplements he was taking included dehydroepiandrosterone (DHEA).

“That . . . supplement ended up containing a substance called DHEA,” he wrote.

“I’m just so upset with myself that I didn’t think to question what was in the supplements. But I never did. And in the program rules, it stipulates that a self-report is the same as a positive test.”

Fritsch has won once on the Buy.com Tour.

DHEA is a hormone produced by the adrenal glands and its production peaks when someone is in their mid-20s, according to the webmd.com website. In most people, production gradually declines with age.

Fritsch joins a small list of players suspended since the PGA Tour began drug testing in 2008.

With the exception of former world number on Vijay Singh, most have been little-known journeymen.

Singh was suspended for 90 days in 2013 after saying in a magazine interview that he was using deer antler spray.

The tour banned Singh for using the spray, which contained an insulin-like growth factor on its banned list.

The suspension was lifted after the World Anti-Doping Agency concluded that the spray should be removed from its list of banned substances.