Golf clubs not expected to police 5km restriction when they reopen 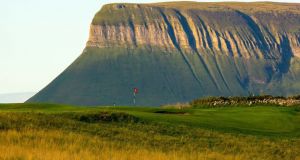 Co Sligo Golf Club has around 150 members in the immediate vicinity of Rosses Point.

Golf clubs will not be expected to turn away members coming from further than 5km when they reopen next week, relying instead on members abiding by the Government’s guidelines.

Courses will reopen next Monday, May 18th, as part of phase one of the country’s coronavirus exit plan with Golfing Union of Ireland (GUI) and Irish Ladies Golf Union (ILGU) protocols restricting play to members only while Government-implemented travel restrictions mean those who live further than 5km from their golf club cannot play.

In the GUI’s document, released last Friday, there is no mention of travel restrictions but a spokesperson for the union told The Irish Times that “it is the responsibility of individuals to observe underlying public health guidelines. Whilst golf clubs must ensure that the game is played safely, it is not the responsibility of golf clubs to monitor or police the laws of the land.”

When contacted by The Irish Times, a number of clubs around the country confirmed that they will be relying on members following HSE advice and that they will have rangers on duty but only to ensure that GUI instructions are followed.

Those instructions are to ensure social distancing via protocols such as restricting play to three-balls every 14 minutes, two-balls every 12 minutes or single golfers every 10 minutes; limiting the numbers of golfers on the course at any one time to 55 per cent capacity to ensure social distancing and only allowing play if booked in advance either online or by phone.

Outdoor practice areas will be allowed to open but the GUI have said that facilities such as driving ranges with covered bays will remain closed until phase three begins on June 29th.

“We’ve asked our members to abide by HSE guidelines set up for the benefit or keeping people safe,” said David O’Donovan, general manager at Co Sligo Golf Club. “We won’t encourage or discourage members to travel to play but some will ask why should someone within 5km be allowed to play while someone who lives 6km away is discriminated against?”

At Black Bush Golf Club in Dunshaughlin, Co Meath secretary manager Jim Quinn says members have been asked to respect the 5km limit but that it is “outside our remit to go checking”.

Quinn expects next week to be relatively okay as the 5km restriction means capacity issues shouldn’t arise. However, come June 8th when the distance extends to 20km and the majority of the 750 members – but timesheet capacity remains reduced – there could be problems.

There are also upsides, as Black Bush has seen, in a number of enquiries from people looking to join the club in order to be able to play when courses reopen. The Co Meath club have so far had 20 new members join since it was announced that golf courses would reopen in phase one and they are expecting that number to rise further this week.

A spokesperson for the GUI told The Irish Times that full adherence to their golf-specific protocols “is absolutely essential” and the union also warned that “the Government continues to monitor the situation closely and have not ruled out the reintroduction of restrictions which could see golf clubs closed once again if the protocol is not followed”.

For clubs like Co Sligo, which has around 150 members in the village of Rosses Point and more in the areas surrounding Sligo Town, and Black Bush, where the villages of Dunshaughlin and Ratoath make up a lot of the membership, the coming weeks will see timesheet slots at a premium. On Monday Corrstown Golf Club in Dublin opened timesheets for next week and within minutes all 180 spots – spread over nine-hole and 18-hole rounds – were booked up.

For courses in more rural areas, it’s a different scenario.

Rathdowney Golf Club in Co Laois has about 300 members but with 160 still to pay their subscriptions for this year as well as the loss of sponsorship, green fees, competition fees and takings for the clubhouse restaurant, they are down around €90,000 compared to this time last year.

What’s more, they estimate that they only have 14 members living within the 5km radius.

“Our information is that we’re not expected to police members coming from outside of 5km but we’re not sure what to do – do we turn them away and face losing members or do we turn a blind eye?”

The club employs two full-time greenkeepers, two full-time staff in the restaurant and 10 part-time staff and next week will reopen to only a handful of members with no competition fees or guest fees coming in until June 8th at the earliest.

Additionally, with schools still closed and junior members around the country looking to play, clubs will have to turn any under-18s away unless they are accompanied by an adult until phase three begins on June 29th.

From next Monday, greens and fairways around the country will see footfall for the first time in almost two months but how busy they are remains to be seen.