Dublin player says while driving would normally be a strength, it has been letting him down of late 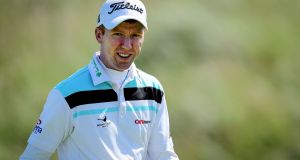 Gavin Moynihan practising for the Irish Open at Lahinch golf club. “I know a very good event is not very far away.” Photograph: Oisin Keniry/Inpho

The wizards in the Titleist travelling equipment trucks were busy in the area near the range, working to produce their magic. Gavin Moynihan’s driver was on the hit list as the Dubliner sought an adjustment to the shaft. The old one had been fitted 2½ years ago and he had discovered in recent months that his greater physical strength had led to some waywardness. For a golfer that’s no-go territory.

His two most recent tournaments – at the BMW International Open and the Andalucian Masters, where the cork trees at Valderrama punished errant drives – had only reaffirmed his belief that change was needed. He held off until he got to Lahinch. The initial impression from his practice holes on Monday and again on Tuesday was a positive one – that the adjustments had brought back accuracy.

For Moynihan this is a big week. It’s not just that he is back on links terrain, where he excelled as an amateur and has experienced his best results as a professional (including a tied-14th at Portstewart in 2017 on a sponsor’s invitation), it’s playing in an Irish Open with its big purse by rights, on his own merit and what that does for his self-morale.

A recent reranking of his Q-School status was timely given that he jumped up a couple of places, and in so doing claimed the last automatic spot in the field without a need for a sponsor’s invitation.

Although ranked 656th in the world, the secret for any player is to believe that this could be their week.

“I keep saying, the difference between the European Tour, the Challenge Tour, the Alps Tour, the EuroPro, the only difference I see is the money. The standard is [high]. You see lads coming through Q-School every year or coming off the Challenge Tour and they compete straight away. Anything is possible in a given week. It’s a few putts here or there, or, out here, a few bounces. That’s all.”

Moynihan, who grew up playing the links at The Island, and whose Irish Amateur Open wins at Royal Dublin showcased some wonderful shot-making, has had to play a game of patience for much of this season.

“The results I have had this year, my good results have been the worse they could have been and then I have missed six, seven cuts by one. Every event I seemed to be the worse I could be.

“I know a very good event is not very far away. My driving has been letting me down which normally would be a strength of mine, so I think if I can drive it well, have a good week. My iron play has been good, wedge play is always good, and putting, I feel more comfortable with the putter. I’m looking for a good week, it is just the driver actually.”

Moynihan is not one of those who got to know Lahinch like the back of his hand through those old amateur days. When the South of Ireland was being staged on the course, Moynihan, more often than not, was away on Ireland duty at the European championships. It was a clash that deprived him of know-how, of a familiarity with the nuances of the course. Yet from what he has seen in the practice days he has gotten to like it a lot.

“The whole course, I can’t say a bad word about it. The conditioning is amazing, the rough is up and the greens are quick.”

Now all Moynihan – seeking to make the most of his place in the field at a Rolex Series event – needs is for that driver to obey his commands.