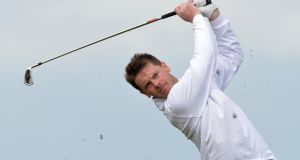 Gary McDermott: goes into the weekend with a comfortable two-stroke lead at The Royal Dublin.

There are those diehards who believe sympathy is a word that should only be found in a dictionary, and never dispensed. Those players competing on Bull Island, with winds gusting up to 30 miles an hour, were grateful for small mercies when organisers gave a sympathetic view to their plight and moved forward no fewer than 13 tees for yesterday’s second round.

In doing so, the length of The Royal Dublin links was reduced by 404 yards, to a more manageable 6,893 yards. Even so, the challenge remained a formidable one. And, by the time the last card had been handed into the recorder’s cabin, it was 32-year-old Sligoman Gary McDermott, these days playing our of Carton House, who retained his place atop the leader board.

A closing salvo of two birdies in his finishing three holes enabled McDermott – now back to full fitness having lost over half-a-stone in weight after suffering from a bug over Easter – to sign for a 71 for 140, four-under par, that gave him a two-stroke lead over Scotland’s Jamie Savage and the Isle of Man’s Tom Gandy.

“Anytime you are better to par around here, on any sort of day, you are walking off with a smile on your face. I just dug deep and managed to hit a couple of good shots at the end that added a bit of a gloss to the round,” said McDermott, that gloss provided with against-the-head birdies on the 16th and 17th holes, both playing into the wind.

On the 16th, McDermott hit a three-wood off the tee and left himself with a perfect yardage of 100 yards to the flag. A nicely struck wedge followed to 15 feet and he calmly holed the birdie putt. On the 17th, a good drive left him with a seven-iron approach, which he hit to 10 feet. Again, his putter did the job. A solid par on the famed Garden hole, the 18th, enabled him to stay ahead.

“I’ve been trying to stay in the present. It is two rounds of golf, that’s all. Two good rounds. The clock starts again (on Saturday) and we will just try and grind something out again,” said McDermott, who won two Senior Cups and a Barton Shield with Co Sligo.

1 Leinster look ready to step things up and burn off Saracens challenge
2 Keith Duggan: Surreal story of John Delaney needs to act as a wake-up call for FAI
3 Born to ride, born to win: Sam Bennett, the making of a green machine
4 Will Connors now delivering on his massive potential
5 Michael Walker: Gareth Bale’s place in Real’s history a strange type of glory
Real news has value SUBSCRIBE