Paul Dunne moves into top 10 as Cabrera Bello reeled in 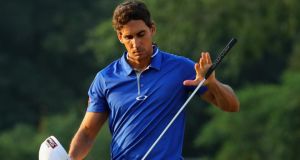 Rafa Cabrera Bello of Spain tosses up his putter on the 18th green during the third round of the UBS Hong Kong Open. Photograph: Warren Little/Getty Images

Ireland’s Paul Dunne moved into the top 10 at the UBS Hong Kong Open on Saturday as Ryder Cup star Rafa Cabrera Bello survived a major wobble in the middle of his third round to take a share of the lead into the final day.

The Spaniard had extended his three-shot overnight lead to a five-shot advantage in the early stages and looked on course to cruise to his first victory since the 2012 Dubai Desert Classic.

He made three bogeys in four holes approaching the turn, however, and when he hit a tree on the 14th while trying to find a tiny gap and then put his third shot in a bunker, a double-bogey saw him lose the lead for the first time since midday on Thursday.

Australian Sam Brazel was the man to take advantage, making three birdies on the back nine to get to 11 under but Cabrera Bello recovered with gains on the 15th and 17th to join him at the summit.

Dunne carded five birdies in a three-under 67 to move to six under and a share of eighth position, five shots off the pace.

Speaking about his topsy-turvy round, Cabrera-Bello said: “Today my score has all colours of the rainbow in it. There’s been a lot of positives and a lot of negatives.

“I was trying to find a stable day where I was just playing solid like I had these past two days. Staying patient, waiting for the birdies to come and I end up going up and down all day.

“The best thing is I’m still in it. I’m still leading. Of course it would have been nicer to have a few to spare but I still would have needed to play great tomorrow and I’m still in a position.”

Cabrera Bello claimed 2.5 points from three matches as Europe lost the Ryder Cup 17-11 at Hazeltine National in September, and a win would cap off an excellent year that has seen him not miss a single cut on the European Tour.

World Number 480 Brazel is searching for a first win on a top-tier Tour and he intends to make the most of going out in the final group on a Sunday.

“It would mean the world [to win],” he told the European Tour’s official website. “But there’s 18 holes to go and I’m just going to approach it one shot at a time and try and enjoy the moment. Just learn from the experience.”

England’s Tommy Fleetwood was two shots off the lead at nine under, one ahead of American David Lipsky and two clear of Andrew Dodt, Justin Walters and David Howell – who equalled the course record with a 63.

Masters winner Danny Willett was six shots off the lead after a one-over-par 71.