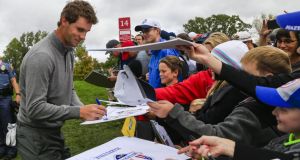 Thomas Pieters is one of six rookies in the Europe team for the Ryder Cup match against the USA in Minnesota. Photograph: Tannen Maury/EPA

When the 41st Ryder Cup gets underway in Minnesota on Friday, Europe will face a situation they have seen only once since the event was expanded beyond Britain and Ireland in 1979.

That is the case of six rookies taking their place in the blue and gold ranks. Danny Willett, Chris Wood, Rafael Cabrera-Bello, Andy Sullivan, Matt Fitzpatrick and Thomas Pieters have never have experienced the sizzling atmosphere of a Ryder Cup and the partisan American crowd that is sure to be as boisterous as ever in a country gripped (and divided) by Trump fever, protests against the national anthem and, as a matter of unity, the desire to reclaim the golden trophy that has resided on European shores for the last six years.

Only at Celtic Manor in 2010, when Graeme McDowell sealed the point that saw the home side win the Ryder Cup back on a scoreline of 14.5 to 13.5, has the European team contained six rookies.

While that half a dozen players on those three days in Wales performed impressively to rake in a total of nine points, European first-timers historically do not fare well in the heat of the Ryder Cup battle.

On the contrary, rookies in the American ranks statistically perform better than their more experienced colleagues.

Indeed, since the 1979 expansion rookies have amassed a total of 53 per cent of points won by the US while their European first-time counterparts have only won 34 per cent. When you take into account that Europe have won a total of 17 more points than America in that space of 37 years it’s clear that European players struggle on their first appearance at the biennial clash.

Take, for example, the contest at Gleneagles two years ago. Both teams came in with three rookies making up their final 12. While Europe finished on a total of 16.5 points, Victor Dubuisson, Jamie Donaldson and Stephen Gallacher only took in 5.5 of those.

In contrast, of the 11.5 points amassed by the United States, Jimmy Walker, Jordan Spieth and Patrick Reed won 8.5, meaning that the other nine players – all of whom had played in the Ryder Cup before – only managed a total of three points from the 28 on offer over the three days.

Indeed, Reed and Spieth combined to win their two morning fourball matches by the huge margins of 5&4 and 5&3 respectively.

It’s a trend that continues as you go back through the contests. A particular standout is the 2008 battle at Valhalla – the last time the US team laid their hands on the Samuel Ryder trophy.

That week the group of Anthony Kim, Ben Curtis, Boo Weekley, Steve Stricker, Hunter Mahan and JB Holmes were inspired by the captaincy of Paul Azinger to win 13 of the 16.5 points that took America to the trophy.

The further you go back, the clearer it becomes.

Of the 18 Ryder Cups that have taken place since the expansion in 1979, US rookies have been responsible for more than half of their side’s points on 12 occasions.

Compare that to Europe and there have only been six contests when rookies have won more than half the points.

It all points to one thing: experience is the key for Europe.

And that component, compared to previous years, is what is missing in this year’s team. However, if you apply the same logic to the US team then they should be weakened by their lack of rookies.

In contrast to Europe, just two of the American team – Brooks Koepka and Ryan Moore – will play their first Ryder Cup.

Both have come through the American university college system – something that points to the success of rookies in the US team, especially in recent times.

The NCAA golf championships are huge events in American college sport and, crucially, are team-focused. Players wear their university colours, thousands of fans line the fairways and players have to perform for their team, more than themselves. Very Ryder Cup-like, you might say.

So, how effective are rookies in the Ryder Cup?

For Europe: It looks like Darren Clarke will have quite the job on his hands.