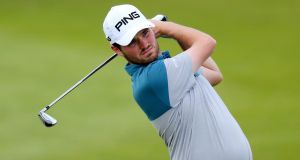 Cormac Sharvin’s second round of 69 leaves him firmly in contention at the halfway stage of the Irish Open. Photograph: Oisin Keniry/Inpho

A nod is as good as a wink in most cases and, as Shane Lowry moved through the recording zone with his young daughter Iris on his shoulders, headed for the on-site crèche, he slowed momentarily to catch the eyes of Cormac Sharvin. When he did, the seasoned player gave a thumbs-up and a nod to the fledgling pro for a job well done.

The 26-year-old from Ardglass, Co Down not only survived the midway cut in this Dubai Duty Free Irish Open but his second round 69 for a 36-holes total of 135, five-under-par, maneuvered Sharvin into a position of contention.

And, in so doing, provided the opportunity to tick a number of other boxes: a win (not so farfetched!) would bring a two-year exemption on the European Tour, while top-10 finishes would earn Sharvin a place into next week’s Scottish Open and also bring with it the prospect of earning one of three exemptions into the 148th British Open at Royal Portrush.

So, all to play for heading into the weekend. Sharvin – currently ranked 479th in the world, and who mainly plies his trade on the Challenge Tour where he has so far enjoyed a fruitful campaign – has cut the figure of someone who belongs on the bigger stage over the past few days. He is fit and lean, drives superbly, has a tidy short game and a fine touch with the putter.

Just as importantly, his head would appear to be in the right place with a golfing philosophy that ensures he doesn’t get too far ahead of himself.

As he put it: “I take it one shot at a time. That shouldn’t dictate how I treat the next shot. I have been working really hard over taking every shot, not trying to get any momentum. I really feel like there is no such thing as momentum, just take one shot at a time and see everything with new eyes.

“I mean, we are all human, so thoughts 100 per cent are going to pop into your head. If you try and block them, I don’t think it is the right thing to do. I let them come and go, then just refocus. I would be lying if I said thoughts didn’t come into my mind, but lots of things can go wrong out there. It is nice to take one shot at a time,” said Sharvin, who turned professional after playing on the winning Britain and Ireland Walker Cup team in 2015.

Sharvin isn’t one of those players who are akin to range rats. In his case, he prefers to do most of his preparation on a golf course. Having narrowly failed to achieve his tour card at Q-School last November, Sharvin went back to old ways.

“I never have really worked on my golf swing,” he explained. “I have went back to just playing golf and not beating balls on the range, just playing golf on a course and putting myself under pressure in my practice so that when I get onto a golf course I know what it feels like to be under pressure, that’s what the basis of my work is.

“You come out here on tour and you see everyone beating balls on the range and you kind of think you should be doing that but I kind of got away from what had worked for me since I was 15 years and I have just been back doing that, putting myself under pressure in my practice rounds and learning how to deal with that when it comes to tournament rounds.”

The evidence of how that philosophy is working has been on display through the first two days, bouncing back from a bogey on the 17th in the second round to birdie the last and head into the weekend as the leading Irish player where the mantra will again be, “one shot at a time.”