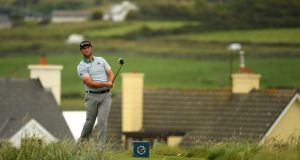 Jon Rahm of Spain in action during a practice round prior to the Dubai Duty Free Irish Open at Lahinch Golf Club. Photo: Ross Kinnaird/Getty Images

Former champion Jon Rahm feels firmly in his comfort zone as he targets a second Dubai Duty Free Irish Open title in the space of three years at Lahinch.

Rahm, who cruised to a six-shot win at Portstewart in 2017 and was fourth at Ballyliffin 12 months ago, comes into the €7million event on the back of a tie for second in the Andalucia Masters and a share of third in the US Open at Pebble Beach.

“I’m confident,” the 24-year-old Spaniard said. “The Irish Open is one of the few events, if not the only one, that I feel almost as comfortable at and get the same level of support that I had last week in Valderrama.

“I don’t know why, it might be my love for the country of Ireland, but the support is amazing. Every time I come I’m just comfortable. It’s a great feeling.”

Ian Poulter comes into the event having missed the cut in two of his last three events, but is relishing playing seven events in the next eight weeks.

“I kind of planned to have a quiet season this year,” Poulter said. “We were thinking let’s see if we can get to 20 events; 28 is on the calendar right now.

“Playing two tours, playing the majors, WGCs, looking at all of the good events you want to play, it’s hard to start chopping tournaments away. It’s still difficult to not play golf.

“Hopefully I’ve kind of recharged the batteries a little bit in the last few weeks before having another push again before taking time off again at the back end of the season.”