BMW Championship final round may have to be cancelled 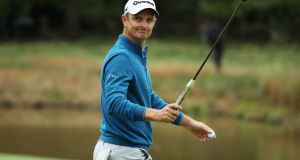 Justin Rose of England reacts on the 17th green during the third round of the BMW Championship at Aronimink Golf Club in Pennsylvania. Photograph: Gregory Shamus/Getty Images

Weather, more important than any drive or putt. The BMW Championship, the penultimate tournament of the PGA Tour’s FedEx Cup Series, fell foul of inclement weather at the BMW Championship as Justin Rose was left to wait in his quest for a victory.

With the Aronimink course deemed unplayable due to heavy rain, the scheduled final round was postponed until Monday.

PGA Tour vice president of rules and competitions Slugger White said the course had taken on about three inches of rain during the week, including another half inch overnight. Greens and bunkers were in decent shape, but several tees and fairways were unplayable.

Rose held the 54-holes lead, one shot ahead of Rory McIroy and Xander Schaufflele, and will be declared the winner if further play doesn’t see players complete half of the final round.

Rose would gladly take a full rainout for his third win of the season. So would a host of players inside the Tour Championship bubble in the projected FedEx Cup standings. Patton Kizzire (28th), Marc Leishman (29th) and Keegan Bradley (30th) would all advance to East Lake if the remainder of the BMW Championship gets called off.

Jordan Spieth began the week inside the top 30 but has since moved to 31st, as he stands T-39 through 54 holes. He’s the odd man out unless the Tour can eke out another 18 holes over the next two days. Emiliano Grillo (31st), Andrew Putnam (32nd) and Ryan Armour (32nd) would also see their seasons come to an end.

Tiger Woods would be on to Atlanta in that scenario, entering the final round projected at 24th in the points standings. Woods shared the 18-hole lead with McIlroy after a thrilling 8-under 62, but the putter has cooled off in two rounds since. He carded a bogey-free 66 Saturday and still left disappointed after missing a handful of solid birdie looks. He’s currently T-11 and five shots off the lead at 11 under.

“It was frustrating because I hit the ball well enough to shoot a low score,” Woods said Saturday.