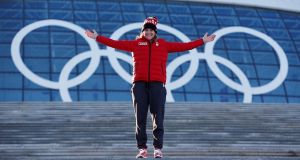 Tweeting from her Toronto couch two weeks ago, six-time Olympian Hayley Wickenheiser had two words for the International Olympic Committee (IOC), which had yet to postpone the Tokyo summer Games amid the coronavirus pandemic: “Insensitive and irresponsible.”

Days later the IOC acquiesced, delaying the Olympics until July 2021 and sparking what some say could be a permanent shift in power away from the hierarchical governing body to athletes.

As the coronavirus pandemic swept the globe, sponsors and broadcasters with millions of dollars on the line stayed mostly silent about the timing of the Tokyo Olympic Games, scheduled to open in July. Sports federations simply said they would take their lead from the IOC. The vast majority of nations bided their time.

For exasperated Wickenheiser, 41, something had to give.

“I think the IOC insisting this will move ahead, with such conviction, is insensitive and irresponsible given the state of humanity,” she tweeted.

Wickenheiser, a Canadian ice hockey gold medallist and doctor-in-training who also competed in softball in the 2000 Sydney summer Games, told Reuters that she could not stay silent.

“[Athletes] were the first voices to really alert the world to how tone deaf the IOC was being,” she said.

As a result, the IOC narrative was “turned on its head” Johannes Herber, chief executive at Athleten Deutschland said.

“The fact that the IOC and Japan decided to postpone has a lot to do with the fact that athletes spoke out and clearly told their stories. It somehow made it real,” he said.

“Formally, nothing has changed and athletes have formally no more power than before. But the power they have through social media to form public opinion was clearly demonstrated.”

Some in the IOC acknowledge athlete power was key in this unprecedented postponement, signalling a challenge to the body’s supremacy.

“I know for a fact that some colleagues messaged the president urging him to postpone because they were under a lot of pressure back home both from the athletes, and in some cases governments,” one IOC member, speaking on condition of anonymity, told Reuters.

Wickenheiser was not the only dissenting voice.

“Our athletes played a critical role in our decision to request the postponement of the 2020 Games,” said Isabelle McLemore, a spokeswoman for USA Swimming, which was among the early groups to call for a delay.

Erik Kynard, a high-jumper who won a silver medal in the 2012 Olympic games, said he had called for the postponement of the Olympics in media interviews and in his comments to the USA Track and Field board, of which he is a member.

“The voices of the athletes were always there. It’s just that when you’re up on a pedestal, it’s difficult to hear,” said Kynard, whose grandfather has the virus.

Michelle Carter, an Olympic gold medal-winning shot putter and member of the USA Track and Field board, said the health and safety of their sports’ officials – many of whom are older than 70 – as well as their family members and fans was a motivating factor.

“We’re just now really realising the power that our voice has, that what we say matters more than what we think,” Carter said.

American Emma Coburn, who took bronze in the 3,000-metre steeplechase at Rio, said that while there was no “war” with the IOC, the incident showed athletes’ ability “to speak up and say what they wanted”.

“In my mind it wasn’t athletes versus IOC; it wasn’t pitted like that. It was, ‘as athletes this is how we feel, we’re communicating it to you and we feel like it’s your job to not only listen to what we want but to what is the safest choice’,” said Coburn, who hopes to compete in Tokyo next year.

Rob Koehler, head of the Global Athlete movement which aims to empower athletes, told Reuters the IOC should brace itself for more pressure, and a new order of things.

“In general, athletes are realising that they have the power, or can have the power,” he said. “The athletes used to be told, ‘that’s your sandbox, you go and play in it, we’ll look after the governance of sport’.

“There have been some significant moments over the last four years which have led to athletes being frustrated and realise their voices aren’t being listened to.”

For Wickenheiser, there is no turning back: “Athletes in the world need to continue to use their platforms to create change and realise the power they have.”