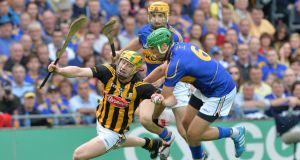 Tipperary’s James Barry is brought out to centre back with Tomás Hamill getting a run at full back against Dublin at Thurles. Photograph: Alan Betson

SATURDAY (Matches at 7.0 unless stated)

Although three of the last eight All-Irelands have been won by the Dublin champions there are no assumptions being made about Ballyboden. The club’s high-profile hurling team obscured the footballers for most of the past 10 years but the latter deserve credit for progress made. Given the record of Tipperary teams against Dublin at underage there’ll hardly be any inhibitions on the part of Clonmel, the first club from the county to win Munster but the same applies in reverse. Ballyboden won’t be caught for the want of decent work rate or complacency.

Were Nemo playing Portlaoise, a pairing that wasn’t far off materialising, the Munster winners would probably be favourites. There’s not much in it in that each side is strong and durable in heavy conditions. Michael Darragh Macauley and Declan O’Mahony look to have an edge at centrefield but Portlaoise countered the pairing well.

Mitchels have done well to reconstitute their challenge after the heavy All-Ireland defeat of two years ago and their dispatch of champions Corofin positions them well for this. But Crossmaglen, after a fallow couple of years by their standards, have also bounced back and as mentioned by Tony Kernan during the week the club has been energised by an infusion of recent minors. This hasn’t just been a matter of rejuvenation, as the younger players have also improved the team.

Castlebar have excellent performers in Tom Cunniffe, Barry Moran, Patrick Durcan and Richie Feeney as well as some good scoring returns from Neil Douglas but overall their ability to thrive in the claustrophobic confines of the Cross embrace is questionable. The Ulster champions are a formidable blend of All-Ireland winning experience and up-and-coming talent. Their absence from the top table has sharpened the appetite and as usual they can draw on the expertise of players from the legendary teams that clocked up six All-Irelands in 19 years. They are well place to push that further.

Allianz Hurling League – Division One A

Two contrasting pre-seasons in that Tipp opted out of the Munster league whereas Dublin won the Walsh Cup, which steadied things a bit for Ger Cunningham after the departures at the turn of the year. In his first match as manager Michael Ryan has opted for a conventional selection after some of the experimenting last year: Brendan Maher is restored to wing back and Pádraic Maher goes to the wing and James Barry is brought out to centre back with Tomás Hamill getting a run at full back.

A certain amount of rebuilding is required after a string of retirements, which necessitates amongst other things a new centrefield. Dublin have Liam Rushe suspended but equally won’t have to face the injured Séamus Callanan. For all that it’s a strong Tipperary selection that can be expected to hit the ground running.

In what is a savagely competitive division, neither side can afford to lose the opening match. Limerick, with a couple of injuries and Na Piarsaigh in the All-Ireland, can make the home advantage tell against a Wexford team that recalls Jack Guiney but is below-par in attack with injuries to Conor McDonald, Paul Morris and Diarmuid O’Keeffe. Between that and venue advantage Limerick can get their long-running quest for promotion off to a positive start.

SUNDAY (Matches at 2.0 unless stated)

Allianz Hurling League Division One A

An early opportunity for two sides in search of redemption. Cork’s dismantling by Galway last year brought Jimmy Barry-Murphy’s reign to an end and a couple of matches later the same happened his counterpart Anthony Cunningham. New manager Micheál Donoghue names half the All-Ireland team and also includes Gort forward Richie Cummins on the bench, who if he can stay injury-free would be a potentially useful addition to the team. Donoghue has said that he wants to instil more consistency in the team. His opposite number Kieran Kingston can call on Chris Joyce, much missed last season, and Lorcán McLoughlin, another long-term absentee, which bolsters the defence. If Galway are to develop more consistency they can start by winning their opening home match.

A big encounter, renewing rivalry from last year’s All-Ireland semi-final and pitting All-Ireland champions against league holders. It promises to be a challenging season for Waterford after the progress made last year and this is a tough departure point. Kilkenny don’t have last year’s distraction of a team in the club All-Ireland and can be expected to mount a more sustained campaign. Waterford are short All Star Tadhg de Búrca who is rehabbing a knee injury and long-term absentee Pauric Mahony. Manager Derek McGrath is aware the public now expects something more expansive from the team after all the defensive consolidation. That won’t necessarily come to pass and if it does it hardly looks likely to start here.

Clare put out a strong side for their first engagement in what they hope will be a swift return to the top. During the summer they won this fixture by 20 points and, even in the absence of Tony Kelly, it looks like a baptism of fire for new Offaly manager Eamonn Kelly.

Kerry’s first match up sees Ciarán Carey’s side having to travel for one of their more attainable fixtures. Séamus Plunkett has had to process a good few retirements but Laois can take the points.