Cross-pollination between the two sports has its benefits 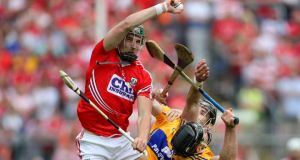 Cork’s Aidan Walsh climbs above the Clare duo of Pat Donnellan and John Conlon to catch the sliotar during the Munster SHC semi-final at Semple Stadium. Photograph: Cathal Noonan/Inpho

It was one of the most thrilling sights of a weekend packed with them across as many sports as you wished to watch: Aidan Walsh soaring high in the first minute of the Munster semi-final win over Clare to pluck a puck-out from the clouds for Cork.

Since last year’s All-Ireland final, Jimmy Barry Murphy has made changes at full back, centre back, midfield and centre forward, but it’s the addition of the former Young Footballer of the Year from Kanturk that has raised most eyebrows.

At his best, he is a really spectacular footballer. I remember in particular an All-Ireland quarter-final for the against Kildare in 2012 which he bossed from start to finish – it’s not often the biggest, strongest player is also the fastest and most effective, but he was all those things on that occasion.

The thought occurred to me that day, during that summer’s Olympics, that if it weren’t for our pesky national games, he’d probably be winning us a gold medal in London in the men’s single sculls, or the triathlon.

As it is, we have to make do with watching him excel at just the two sports, and what struck me on Sunday was what he had managed to transfer from football to hurling.

The timing of some of those sky-scraping catches that he adorned the game with on Sunday were extraordinary. They really showcased the all-action nature of his play, how he lands after a catch and immediately gets on the front foot. It’s almost like he can turn his body in mid-air, to land facing the goal that was at his back for the puck-out.

There’s also the physical conditioning that is a basic requirement for Gaelic football at the highest level now. When Walsh’s team-mate Eoin Cadogan togs out for the hurlers, he looks like a beast. When Cadogan plays for the footballer. . . well, he looks like an inter-county footballer.

I noted on Twitter during the game that hurling fans would do well to recognise that cross-pollination between the two sports has its benefits, but traditionally that is not something that hurling fans (or ‘hurling people’ as they rather clannishly prefer to be called, said one Tweeter to me) are all that comfortable doing.

And I’m not just talking about Kilkenny here. Across the major hurling counties there is a snobbishness towards football that doesn’t do them any favours. We may call hurling our national sport, but that must come with an asterisk when over half the country doesn’t compete in the All-Ireland championship.

They say it takes a lifetime to learn the game but it was striking to see what Walsh, and another man with plenty of football played in his career, Conal Keaney, were capable of doing this weekend. Like Walsh, Keaney was a physical player in the big ball code – but in hurling, he seems able to completely monster opponents.

Of course, they are different sports that require different body shapes and hurling fans will tell you that football players have the luxury of three months where you barely have to touch the ball in training, and that leaves a lot of time for strength and conditioning. But hurlers need only look at their football counterparts to see that adding some muscle doesn’t mean you lose any pace. It just makes you a fitter, stronger, more effective sportsman.

Judging by Davy Fitzgerald’s remarks about Podge Collins after the game – “there are a few (of our) lads that think they can play both codes; you can’t do it” – Aidan Walsh’s attempts to play both this year are destined for failure. But it’s supposed to be your hurling that should suffer. Walsh’s hurling touch looks to be right there. It was his display when coming on in the second half of Cork’s National Football League semi-final capitulation against Dublin that was really off the pace.

When we spoke about the dual player issue on The Irish Times Second Captains podcast on Monday, former Cork hurler (and no mean footballer in his own right, although he never played for the Cork seniors) John Gardiner said you’d have to be a professional athlete to play the two sports. Holding down a job is a total non-runner when you need recovery sessions and proper rest-time to compete at the very top in both codes.

Since that’s not going to happen any time soon, it seems like Aidan Walsh, Podge Collins and their ilk are something very much to be celebrated while they’re still around. And maybe it’s not too much to ask that instead of demonising their desire to compete, we should be open to the two-way street that playing different sports opens up.