Tyrone will be tempted to cut loose against Dublin

Mickey Harte may decide to engage the champions in a fire fight, despite the dangers 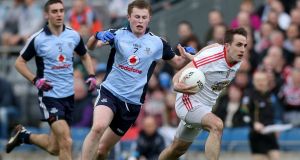 Even on a teeth-chattering night in February, this fixture promises fire. Tyrone had hoped to get a crack at Dublin last September. This is their first real opportunity to measure themselves against the best since they reclaimed their status as the best in Ulster.

It is almost forgotten now that in the days after Tyrone won the Ulster championship after a six-year wait last summer, warnings emanated from across mid-Ulster towards the capital. Suddenly, Mickey Harte’s men were everybody’s fancy to bring down Dublin. The team of pace-and-precision footballers which Harte had engineered with painstaking patience in the shadow of Donegal’s glory years suddenly looked the brightest bet to trouble the All-Ireland champions.

As it turned out, they never got the chance to discover the truth of the hypothesis, falling to Mayo in a terse, low-scoring quarter-final by a single point. Still, Tyrone have been reinstated as a top-four team on the strength of that provincial triumph last summer and are expected to present Jim Gavin with a new and oblique challenge if and when they meet in the championship.

But that ‘if’ remains significant: Tyrone must first negotiate the traps of the Ulster interior this summer and if both teams keep winning, then they will come head to head in the All-Ireland semi-final next July.

So Saturday night’s showpiece, under lights and low temperatures in Croke Park, gives the Ulster men an opportunity to do something special. Dublin are running hard against statistical history now, unbeaten for 30 games in league and championship. Ending that – in Croke Park – would be no insignificant achievement, regardless of the plumage in Mickey Harte’s cap.

Still, Tyrone have a choice to make. Do they persist with the sticky, highly organised defensive, counter-attacking system through which Harte forced Tyrone back into the conversation? Or does he trust that ferociously swift half-back line of Tiernan McCann, Peter Harte and Jonathan Monroe to cut loose more frequently. Scores on the board were Tyrone’s main problem last summer: it is debatable that they would have won the Ulster final but for a supernova burst from veteran Sean Cavanagh. The Moy man is listed in an impressively deep Tyrone bench for the game.

The absence of Mattie Donnelly, who is recovering from concussion, robs Tyrone of a critical midfield combatant and strike runner. Colm Cavanagh, once a fountain of industry, has become the key cog in Tyrone’s system. His shuttling between midfield and central sweeper is what makes Tyrone’s defensive structure look so secure. Cavan coughed up six frees to Dean Rock and another to Cormac Costello in their opening-day defeat: Tyrone will have to defend with more discipline.

If they can hold Dublin to 0-11 from play, as Cavan did, they will fancy their chances. Owen Mulligan’s audacious goal in Croke Park reflects the zenith of the Tyrone years, when playing Dublin was a joy. But that was 11 summers ago.

Since Dublin transformed themselves in 2011, they have beaten Tyrone five times, drawn once and lost once. Tyrone put three goals past Derry and five past Cavan in the Ulster championship last year before they went conservative: the temptation to just run at the champions this evening, to just see what happens, must be very strong.

The trouble with engaging Dublin at ping-pong attacking football is that they absolutely love that. You might score – even a goal or two. But then its 50 minutes in and you are down by eight; you can’t catch your breath; Jack McCaffrey is going past you at about the same speed as a Koenigsegg Agera R; at least a dozen Dubs are marauding through gaps in a suddenly melted defence; and Eoghan O’Gara is warming up on the touchline. Things can get out of control very quickly. And out of control is not a world Mickey Harte likes.

So what to do?

The beauty about Dublin is that they make no secret of what they are about. Teams know what to expect but still, from Stephen Cluxton’s kick-outs to Brian Fenton’s high-fielding to the unbreakable composure with which they are playing the game, preventing them from doing it has been beyond the ability of the best in the country.

Worst of all for would-be contenders, the established players are fighting to prove themselves this spring: the inclusion of Niall Scully, one of the conspicuous successes of the January competition, is a reminder from Jim Gavin that the past means nothing. Dublin to keep on truckin’

1 Gordon D’Arcy: If Farrell can tap into our self-worth, we’re all on a winner
2 Winds of change as Ireland name a refreshed team, picked on form
3 Nike Vaporflys won’t be banned but regulations will tighten
4 Who is Caelan Doris? Meet Ireland’s newest rugby star
5 Saracens docked 70 points and interim CEO resigns
Real news has value SUBSCRIBE