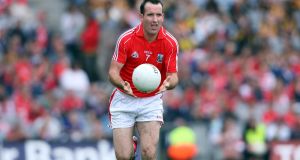 Kieran O’Connor in action for Cork during the 2008 All-Ireland quarter-finals. Photograph: Donall Farmer/Inpho

Tributes have been paid to All-Ireland medal winning Cork footballer and father of three, Kieran O’Connor who died from cancer on Wednesday aged 41.

Former Cork football coach and fellow Aghada club man Conor Counihan said O’Connor’s death had left a void for his family but also for everyone in the community of Aghada in East Cork.

“He put up a tremendous fight over the last few years since he was diagnosed with cancer and while we knew the outcome wasn’t going to be great, it’s still a huge shock for everyone in Aghada.

“We’re a tightly knit community here but we’re still pretty rattled at the fact someone so young could die like this – Kieran was only 41 and he leaves a wife and young family behind.

“It’s sad for Kieran to pass away at such a young age but it’s the void he leaves behind for his family – his wife Sinead and their young children, Isabelle, Ava and James. He will be a huge loss.”

Counihan, who coached O’Connor when he played underage with Aghada and later coached him when he played with Cork, described his fellow club man as hugely committed.

“Kieran was very tenacious, very tight, and like all good backs he would play on the edge – he was very committed and he showed that same commitment, fighting his illness right to the very end.”

O’Connnor joined the Cork senior football panel in 2004 under coach Billy Morgan. He played on losing sides in the 2007 and 2009 All-Irelands before finally securing a winner’s medal in 2010 when Cork beat Down 0-16 to 0-15.

O’Connor was diagnosed with bone cancer in 2017 and last night Cork County Board chairwoman Tracey Kennedy extended the sympathies of the board to his widow Sinead and young family.

It was with great sadness that we learned of Kieran’s death today. He was a tower of strength on the field of play, and showed that same strength of character and courage in dealing with his illness over the past few years.

“He will be an unimaginable loss to his family, and on behalf of all in Cork GAA, I would like to extend our deepest sympathies to Kieran’s wife Sinéad, their three children, Isabelle, Ava and James, and also to his parents Pat and Mary, sister Aisling and brothers Patrick and John Paul. ”

“The courage, determination, spirit, and bravery of Kieran as a player was seen at its finest over the last three years as he battled his illness with dignity and respect,” said Aghada GAA.