Coach Pat Lam getting the best out of his young charges 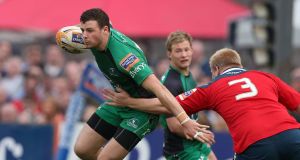 Attention has been drawn to Connacht’s Robbie Henshaw, who many believe should be Ireland’s next number 13. Photograph: Inpho.

Fast out of the blocks Pat Lam’s positivity and his injection of vitality into this young Connacht side has already set up a season full of promise. They were the only Irish team to win last week, when did that ever happen before?

This week’s addition to last week’s winning side brings Kieran Marmion into scrumhalf and Robbie Henshaw to the centre. Henshaw will be closely watched this year and although Luke Fitzgerald still hasn’t emerged in Leinster and Ulster’s Jared Payne is sitting out this week, Henshaw’s speed at growing into the 13 position is an ongoing subplot to Connacht’s fortunes.

Edinburgh will be buoyed by squeezing past Munster and they are playing for the first time on their new hybrid surface. Alan Solomons has made just two changes with Sam Beard moving from centre to right wing and Nick McLennon on the left. Tim Visser is unavailable to Solomons this week.

“It was an awesome feeling as it’s a tough place to win but we have to put it behind us,” said Solomons of his win over Munster in Limerick.

The Connacht backline has an average age of 22.5 years, which will probably hurt them on some occasions this year. But then Mils Muliaina has still to come in while Bundee Aki and Tom McCartney should stiffen the squad when they arrive in November.

Still Connacht have a lot to build on and, if Lam can get some results and develop talent, there won’t be many disappointed faces around Galway.

1 Seán O’Brien: Anger over my parents’ break-up never left me
2 Robbie Henshaw likely to be the only Irish change for France finale
3 Drogheda United finally on the up and up after dramatic night
4 Cian Healy: ‘Realistically I got away with murder when I was younger’
5 Bartomeu resigns and drops bombshell of Barcelona joining European Super League
Real news has value SUBSCRIBE