Something from the weekend. Our GAA team’s view from the Press Box 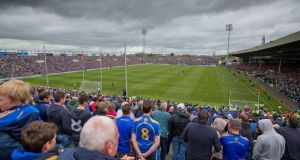 A view of Sunday’s game at the Gaelic Grounds. Photograph: Inpho

The aesthetic highlight - for Tipperary supporters and neutrals, anyway - of the Munster semi-final in the Gaelic Grounds was the display of John O’Dwyer, the Tipperary scoring phenomenon known more widely as ‘Bubbles’.

His return of 0-7 on Sunday included no wides from play and just one placed ball - a 65 when Séamus Callanan was temporarily replaced - and an array of occasionally impossible looking shots from all angles brought his championship total to 3-43 of nine starts and 10 appearances. That’s an average of more than five points a match since his debut as a substitute in the 2013 defeat by Limerick in the Gaelic Grounds where he none the less scored 1-3.

It’s an impressive haul for a player who’s not the first-choice free taker - although he was entrusted with the most famous free of 2014, the 97-metre award in the dying seconds of the All-Ireland final against Kilkenny which went close but not close enough to pass the scrutiny of Hawk-Eye.

Speaking about his former team-mate last week just a couple of days before the match in Limerick, retired All-Ireland winning captain Eoin Kelly - a productive scorer himself - spoke presciently about O’Dwyer’s impact on matches, his skill levels and the economy of effort his extraordinary wrist strength facilitates.

“The skill levels of Bubbles - I’ve never seen anyway. I remember inside in training last year, we were kind of sprinting down the pitch in fours; you’d to strike the ball across - typical Eamon O’Shea training.

“I remember I hit the ball behind Bubbles. When you hit it you’re saying, ‘Jaysus, that’s a bad shot,’ but he put the hand out like that [behind his back] full tilt - snapped it like that. I remember saying to myself, ‘Jesus!’ Do you know what I mean?

“He’s a pair of wrists bigger than any of our legs. That’s where the power comes from. I think he’s an exception. Even talking to lads from the other counties, one said to me ‘is Bubbles injured?’

“He said, ‘I’m not watching it if he’s not playing’. He has that appeal to lads, he’s so skilful. When you see him in full flight, he’s unbelievable. I hope he’s playing Sunday.”

Limerick would have hoped otherwise. SM

For the second game in a row in Ulster, Monaghan took their time about it against Fermanagh. It feels like no coincidence that for the second game in a row, the entry of Dick Clerkin to the side made all the difference. The country’s longest-serving intercounty player came on for his 50th championship appearance at a point in the game when Monaghan only had a two point lead. His approach to the game - simple, economical, the right pass at the right time - illustrated the feel he has for what’s needed at any given stage.

The question now is whether Clerkin will start the Ulster final. Though his impact has been significant on both occasions, there’s no doubt the old bull in him is anxious to be part of the fray from the throw-in. He walked off the pitch in Breffni Park with his leg heavily strapped so that might do Malachy O’Rourke’s deciding for him but assuming he’s fit and firing, it’s no easy call.

One way or another, he will be one of Monaghan’s three most important players in the final. MC

Leaving Cert prep forces Beibhinn Parsons out of rest of Six Nations 15:01
Kieren Westwood: ‘I feel obliged to clear my name and defend myself’ 14:01
All in the Game: No Moore medals for Steven Gerrard 12:34
Tokyo marathon cancel next month’s mass participation race 13:20
Added Time: What can be done about worrying trends at schools rugby matches? 11:48
Here is your handy guide to sport on television this week