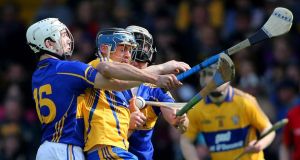 “What do you think of hurling?”asks RTÉ’s Marty Morrissey outside Notre Dame American Football Stadium after the Super 11 hurling exhibition game last October .

“Hurling is the most fantastic thing I’ve ever seen,” answers the sunglass-wearing young American. “It was an explosion in my brain of fantasticness” he then adds .

“And what did you think of it,” inquires Marty of the second sunglass bespectacled young man ?

“Well I live and die that game . I’m gonna relive that game for the rest of my life”

“Do you think this Irish game of hurling has the potential to conquer the United States of America?,” asks Marty

“The potential is exponential,” answers Yank number one in this slightly tongue-in-cheek Youtube clip entitled Americans LOVE hurling. So there’s our soundbite and proof positive that our wonderful game of hurling has the potential to become a worldwide participation sport . Well it’s a start anyway .

We now have a friend in Sky TV who will endeavour to bring hurling to a new audience, we’re assured.

A number of years back the travel website Lonely Planet composed their own description of hurling . They wrote that hurling is a mad kind of aerial hockey invented to make the English feel embarrassed about tiggytouch soccer. From a distance it resembles a roaming pack fight between men with thin pale legs and names like Liam and Sean. They described it as rapid, breakneck and rambunctious. The aim, they explained is to hurtle a pellet hard ball called a sliotar into goals using a stick with a paddle at its end called a hurley.

In love
Right, now, try to visualise that scene on a hot Sunday afternoon in Tom Semple’s Stadium in Thurles with JJ Delaney or Pádraig Maher breathing down your neck.

In early September 2005 another young American arrived at my classroom door one evening as the schoolday was ending . He was new to the country and had fallen in love with this “mad game” as he described it . He (Andy Mendlowitz) would later produce a book entitled Ireland’s Professional Amateurs with the byline “A Sports Season at its Purest”, in which he chronicled a year spent watching and learning about Gaelic games .

In the prologue he wrote: “to my untutored eye, hurling seemed shockingly dangerous as players flung sticks high into the air at a little ball. They didn’t wear any equipment –no chest protectors, knee pads or shin guards.”

At the time helmets were optional which he was very impressed by as well . Imagine if he had seen Christy Ring, Mick Mackey or Nicky Rackard with bandaged heads getting back into the action and blood still oozing out .

“The action was lightning quick without time-outs or offside penalties.The players, 15 to a side, displayed awesome skills in balancing the peach-size ball on the flat end of their stick ,then passing it or shooting with a pinpoint strike.”

Needless to add he was very impressed and his book was a very pleasant and interesting read.

In August 1967 Joseph Carroll (Irish roots somewhere there I presume ) writing in Sports Illustrated said: “hurling is like nothing but hurling: a glory to play and a splendor to watch. The ball scampers like a rabbit or soars like a bird, with anarchic variations of movement both aloft and on the ground. It is the swiftness and unpredictability of a ball in almost continuous motion that makes hurling seem like a game left over from more innocent times than ours. There are rules, naturally, but a watcher isn’t much aware of them. The game is so simple an expression of the dark old human compulsion to whack things about (not including rival players) that it is satisfying to watch even if one has no understanding of the rules at all”.

Rumour mill
Anyway from May this year, hurling, like the Pope’s message at Christmas and Easter, will migrate to Urbi et Orbi . It will be all in full HD for the Sky-covered world to appreciate.

On this island the rumour mill is slow enough, though , in producing any speculation, as to the composition of Sky TV’s new hurling analysts or presentation team. Former Dublin minor hurler and long-time Tipperary hurling enthusiast Niall Quinn is doing his bit, as a Sky soccer pundit, to gently introduce the Beautiful Game followers to the even more Beautiful Game which we have on this side of the Irish Sea. We’re watching this space .

On a more serious note though, maybe the game could be promoted a lot better countrywide first before hitting the streets of Baltimore, Philadelphia or Laredo.

Portarlington, Portmagee and Portaferry could be the first ports of call. Some of the proceeds of the country music week at Croke Park could be funnelled into the promotion of hurling at home .

The new hurling review committee were to meet this week. I haven’t yet seen their terms of reference. Maybe they might look for a more substantial financial package to be spent developing hurling in the many areas of our country in which very little of it is played. Indeed I hope GAA president-elect, Aogán Ó Fearghail, will also put it high up his list of priorities for his term in office.

But we certainly welcome a new audience to our beautiful game and hope that the inclusion of Sky TV will take it in directions as yet unimagined.