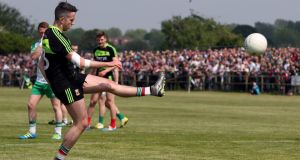 Cavan and Armagh have played out some feisty clashes of late but we’re fairly certain one tragic set of circumstances from a game between them 77 years ago has never been repeated. With Cavan winning by 2-5 to 0-1 in the 1929 Ulster semi-final, Armagh’s James Kernan was involved in an accidental collision with Cavan icon Jim Smith. Kernan, an uncle of future Orchard manager Joe, later took ill and, two days later, died of internal injuries.

And when the inquest failed to conclusively clear Smith – a sergeant in the newly-formed Garda Síochána – of wrongdoing, Garda top brass ordered the Cavan captain’s arrest. So, Smith was charged with murder or, to be exact, that “on Sunday, June 30 at Belturbet he did feloniously kill and slay one James Kernan of Crossmaglen, Co Armagh”.

GAA president and legal eagle Seán Ryan defended Smith and all of the witnesses at Cavan district court swore the incident had been unintentional. Smith was cleared; four years later, he became the first captain to bring the Sam Maguire to Ulster.

Exiles get chance in the spotlight

Mayo’s walloping of London brought to mind what was nearly the biggest upset of all time five years ago this month, when the Exiles took the Connacht champions to extra time in Ruislip in what was James Horan’s first match in charge.

This year, New York came similarly close, running Roscommon to two points in Gaelic Park. Had they come off, they’d have ranked at the top of the list of greatest upsets, alongside Waterford footballers beating Kerry in 1957 and Antrim hurlers beating Offaly in 1989.

For sheer drama, though, it’s hard to look past Westmeath Under-21s beating Kilkenny (the Cats were 1/66!) last Wednesday night. Incredible.

The mighty Dublin GAA juggernaut is still on track – and we’re not talking about football. On Saturday, handballers Eoin Kennedy and Carl Browne won the All-Ireland senior hardball doubles title.

For the uninitiated, there are doubles competitions in three different forms of handball, with variations in the size of the court and the type of ball used. Kennedy and Browne, from the St Brigid’s club in Blanchardstown, now hold all three titles simultaneously, the first time this has happened. Hardball is exactly that, too. The ball is made of cork and goatskin, travels at well over 100mph and is known as an “alley cracker”. And, presumably, it would have the same effect on a skull . . .

Up For the Match-style debate nights are becoming popular as fundraisers. At one such event last Thursday, former Monaghan and Meath manager Séamus McEnaney jokingly bemoaned the fact he “hadn’t one dirty hoor to call on” when he was in charge of the Royals. To which Colm O’Rourke dead-panned: “That’s funny, when Seán Boylan was over us, the problem he had was leaving a few of them out!”

The number of successive wins Mayo have now recorded in the Connacht SFC, stretching back to 2011.