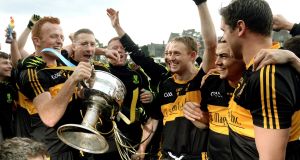 When I heard that Cillian O’Connor had scored 4-4 for Ballintubber last weekend, I immediately tried to find footage of it online, as if coverage of the Mayo senior club football quarter-finals should be at my fingertips as a matter of course. I haven’t managed to find them as yet, but I’m sure there was someone there, recording it for posterity.

It was striking last weekend to see how widely the key moments of club games, not even the ones shown live on TG4, were disseminated on social media. I had seen Jody Dillon’s dramatic, brilliant last-second goal for Stradbally against Portlaoise, for instance, numerous times before I’d finished my breakfast on Monday morning.

Not just that – I also saw a goal scored direct from a free-kick by Belmullet’s Shane Nallen in a Mayo intermediate championship game that was one of the best scores I had ever seen.

There was a time when recorded footage of club games was confined to county finals. Our club Milltown had reached Galway county finals in 1987 and 1988, and I remember both of those games were on videotape in our house, but were kept in my parents’ bedroom, like a kind of footballing snuff movie. We’d have to go the extra mile if we ever felt so inclined to put them on, as I did on a number of occasions.

Because back in the day, when there might only have been four or five live games on RTÉ television in the year, the prospect of seeing yourself, the humble club player, on the small screen was a bewitching prospect. The commentator might just have been the local AI man, but if he was given a mic, and he was saying your name, then you were a ‘made’ guy. You were the real deal.

A key part of the business model for our commentator/cameraman combo was to have the video ready to go by the time the victorious team had made it back to the local pub to begin the celebrations that night.

So there was no real time to find the central truth of the piece on the cutting-room floor; what it lacked in narrative clarity it would have to make up for in gritty realism. Production values were often sacrificed at the altar of expediency. I remember one game tape in particular that began with seven silent minutes of uninterrupted Tuam skyline, eerily reminiscent of Andy Warhol’s Empire (only without the Empire State Building), before it promptly cut to the action on the field.

Make enough copies to satisfy demand, and then get them out the door as quickly as you can – you can see why the business model was such a success. If you had slung a point over the bar with your bad foot from 21 yards out on the angle, you couldn’t NOT buy a copy. Never let it be said that your right leg was just for standing on – sure don’t we have it on the tape?

However as the action unfolded, it quickly became clear to us all that our county man Diarmaid Blake, who had been nominated for an All-Star the year before, had bossed the game to an almost embarrassing degree. If the rest of us had 15 or 20 possessions each, Diarmaid had had 70. The tape doesn’t lie.

The best GAA clip on youtube, by a country mile, is a collection of Peter Canavan scores for his club Errigal Chiaráin. Dr Crokes’ Colm Cooper worked wonders last Sunday, and there’s plenty more where that came from online too. But I watched Pádraic Joyce dominate Galway club football for an entire decade, and none of that has made it online to the best of my knowledge. Ciaran McDonald did likewise in Mayo for Crossmolina.

It’s nice for those of us unable to make it to Nowlan Park for the last few chapters of the Henry Shefflin story to be able to see the highlights on our phone hours after they happened, but there’s a lot to be said as well for being there and experiencing it in the flesh. No amount of grainy camera phone footage can replace that.