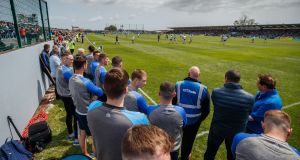 As a friend once quipped on what used to be the regular means of transport to England – the boat train – as he peered into the night on the track out of Holyhead, “Wales always seems to me a dark and brooding country.”

Venues have such a different character at championship time, especially in the clean heat of summer sun. When you’re used to visiting in the grey austerity and frequent rain of club or national league fixtures, it can be hard to shake the image.

Things we’ll miss: predictably, it has hit hardest recently and last Sunday week, sitting in the car outside a supermarket in glorious sunshine, it was hard not to be reminded that in such circumstances every other year the car would be heading to Thurles or Cork or some other venue.

A year ago on the bank holiday weekend, it had been off to Walsh Park for the visit of Limerick. This was a novelty in that it was only Waterford’s second home match in the Munster championship in 23 years, the ground getting the go-ahead to stage matches in the second year of the provincial round-robin format.

And there it was at the beginning of June 2019 – transformed into a sunny, championship venue with new entrances, car park passes and specially constructed wooden desks on the seats in front of the usual media shelter with its inadequate scattering of rusted and imaginatively bent chairs.

The one thing missing on the day was the engagement of the home team. Having narrowly lost their first home match and then on the road in Thurles, Waterford were in no humour for the retaliatory vigour of All-Ireland champions, stung into a response after fluffing their first outing at home to Cork.

As expected and generally foretold, Limerick duly polished off a victory to refloat their defence of the MacCarthy Cup even if the 20-point margin, which confirmed them as provincial contenders, also suggested that stiffer tests awaited.

But the championship is a mosaic. We know what most of the tiles look like and the ones that differ from expectations help to give the overall pattern its colour but we will miss the fascination of watching that bigger picture take shape.

The current disruption which threatens the first abandoned championship in 122 years has already put paid in 2020 to one of the great innovations of recent years – the round-robin hurling championships.

Who could have dreamed that the GAA would actually stumble on something straight from the professional precedents of soccer world cups and rugby championships – matches starting at the same time and televised with little windows to bounce the viewer to other venues so they could watch a significant score?

We’ll miss a climax like last year’s Leinster championship with each point at times tilting the scales of qualification and the outcome so opaque that when players and supporters gathered in Wexford Park to await the final whistle in Parnell Park, no-one appeared to know what was happening.

There was even time for a Gaelic re-imagining of those scenes familiar from other sports – the getting ready to attack the referee because someone had got the score wrong.

We’ll miss the process, the carefully arranged emergence of contenders and the mounting evidence presented by their progress even – and maybe especially – if we are to have a blitzkrieg championship rolling remorselessly through the winter.

Then there is the cast of hundreds, who we’ll miss along with the arc of their narrative. It’s like we went to the theatre in February and just as the threads of the story were coming together, a fire alarm cleared the auditorium just before it burned down. Will they be able to stage it again? When?

It was cold beyond belief when I got to Ballykinlar back on an April evening in 1990. My car had been making an ailing noise for the latter part of the journey but a complete lack of any mechanical understanding helped to persuade me that I’d be home before the matter needed any drastic attention.

Down footballers had, in manager Peter McGrath’s first year, made the upcoming league semi-final. I had formed an enthusiast’s view that were worth keeping an eye on after a league match against Cavan in Breffni Park. If Linden and McCartan weren’t quite yet Lennon and McCartney, I was still impressed by the attacking style.

In Ballykinlar when the training session in the shadow of the large military installation had finished, a couple of kindly souls, including selector John Murphy, offered to lead me out to the Dublin road.

My car wheezed and struggled and eventually ground to a halt in Castlewellan where the clutch was deemed “away”. In a very GAA deliverance the treacherous vehicle was pushed off the road into the driveway of the county minor manager, Gerry Dougherty, who then organised somewhere for me to stay.

The next day another selector Barney Treanor, a busy farmer, towed me to Newry to get the clutch replaced.

Down would run Meath very close in the league final and of course 16 months later beat them in the All-Ireland final to become the first county in 23 years from outside Munster or Leinster to win the Sam Maguire.

At the Down press night before that 1991 All-Ireland, Newry was packed on a sunny September evening. I met both John Murphy and Barney Treanor on the field and said that the traffic around Páirc Esler had been so crazy that I had been forced to park the car miles away.

John looked at me sceptically and replied: “We don’t want to hear anything about your car.”

Both of them died this year, Barney in February and John the week before last. Although I hadn’t bumped into either in aeons, I will always remember their kindness 30 years ago and the exhilarating adventure of the football team they helped to assemble.

We’ll miss them, especially whenever the games return and the great drama resumes.