After brawl in Tralee, many are questioning adequacy of rules and their enforcement 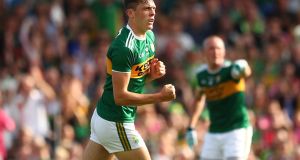 Amidst all of the angst generated by the scenes in Tralee on Sunday, one of the issues that needs to be addressed is the protection of players.

The outrageous assault on East Kerry’s Darragh Moynihan by a member of the Dingle retinue, which knocked him to the ground, has been met by a proposed suspension of eight weeks. This is the minimum penalty under 7.2 (c) (Misconduct at Games by Team Officials) IIa: “Any type of physical interference with an opposing player or team official.”

There will be three days to decide whether or not to look for a hearing, but you’d imagine that it should take all of three seconds for Dingle to accept the proposal rather than risk letting the hearings committee come to a more appropriate conclusion.

By comparison, Wexford hurling manager David Fitzgerald received the same suspension for entering the field during last year’s league semi-final against Tipperary, where he and opposing player Jason Forde shoved one another in passing.

Sunday saw the Dingle official, who isn’t named by Kerry but had been sent to the stand by referee Paul Hayes on Sunday, run on to the field during a fracas and hit the unsighted Moynihan on the head. It will be astonishing to anyone who saw them that the two incidents are seen to merit the same suspension.

East Kerry manager Gerry O’Sullivan, who was also sent off after the violence, has been cleared of any part in the fracas, as had been expected in the county, as he was felt to have been solely trying to keep the peace.

This has been a bad few weeks for the GAA as week after week has brought damaging publicity from matches around the country, and there appears to be no end to dispiriting scenes filling pages and flickering through social media.

Imposing a minimum suspension to deal with the most shocking incident at the weekend will create further controversy. Players are criticised when their behaviour is unacceptable; are they not equally entitled to better protection than Darragh Moynihan has received?

These scenes are simply going to re-occur until it becomes so disadvantageous to the perpetrators that self-interest will regulate behaviour.

There were also one-match bans handed down to East Kerry’s Clifford brothers, Paudie and David, who were red-carded at different stages during the match.

David Clifford is the frontrunner for Young Footballer of the Year and a talent so prized in the county that he was fast-tracked from minor to senior this season. News of his injury-enforced absence from part of next year’s league caused gloom in the county last week.

His brother Paudie’s red card was ascribed by some neutrals in attendance to a rash response to what he saw as provocation of his brother, who in a later incident was also dismissed.

It is of course any player’s responsibility to maintain discipline, and talented forwards have to learn that lesson more quickly than most

There was no questioning the red cards and it’s not the first time the brothers have been sent off, but the nagging question is what’s in it for the most highly rated young forward in the game – who scored four goals in Kerry’s three All-Ireland quarter-final matches, including the sensational equaliser against Monaghan in Clones – to lose his discipline to the point where he’s getting sent off?

One highly experienced football personality in Kerry wondered in the aftermath what would Clifford’s reaction be were an AFL club to come looking for him now – an option he ruled out when graduating from minor.

It is of course any player’s responsibility to maintain discipline, and talented forwards have to learn that lesson more quickly than most, but are the rules and their enforcement adequate to the challenge of protecting skilful players?

Before his election, former GAA president Liam O’Neill chaired a disciplinary task force whose recommendations narrowly failed to make the rule-book in 2009, although a number of them were later accepted. He spelled out to congress what the point of the rules were.

“You can go back to the clubs and schools, look into the eyes of children and tell them that if they work hard and learn these skills, we will protect you. Voting against is to go back to the same children and say we took the easy way out and shirked our responsibility.”

O’Neill also advocated a reduction in numbers on the sideline at matches and there is no doubt that the numbers present in Stack Park on Sunday – which grossly exceeded the permitted contingent – played a material role in the fracas.

A good suggestion is that if there is no custom-built enclosure for substitutes, they should be seated in the stand even if it is on the far side of the field from the dugouts.

Dingle are a talented team with a good chance of deposing Dr Crokes next Sunday, again in Tralee, but for a while they had looked uncertain to fulfil their potential. This year there has been an edge to their play, or, as more circumspectly described by one official, “a change in attitude”.

Combined with some exceptional talent – All Star full-forward Paul Geaney is in thunderous form – they now look capable of winning the title for the first time since dominating Kerry football in the 1940s.

There had been some tension left over from the drawn semi-final, which had also featured more than one – albeit less serious – outbreak of brawling and a couple of red cards.

All told, it added up to fertile soil for what happened. In the words of one local: “People go on down here as if our football is ‘purer’ than in other counties but if the conditions are right there is always danger that this can happen anywhere.”

1 Golf in Level 5 Covid restrictions: Clubs still waiting to hear if they can remain open
2 Hugo Keenan could start in changed Ireland team against Italy
3 Here is your handy guide to sport on television this week
4 Gerry Thornley: After 32 weeks the Six Nations is back up for grabs
5 The Offload: Spectre of doping hangs heavy over South African rugby
Real news has value SUBSCRIBE