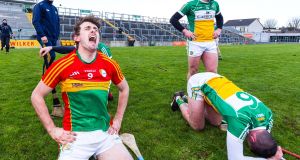 Back in early October 1995, within weeks of Clare having won a fabled hurling All-Ireland, they headed to Tralee for round one of the hurling league, which in those days straggled on from autumn to spring with a vast break at Christmas.

It was the first match the Kerry hurlers had ever played in the Division One and they marked the occasion by defeating the All-Ireland champions, two thirds of whom lined out that afternoon.

Clare manager Ger Loughnane, who in the circumstances was able to enjoy the theatre of it all, told an excited Kerry dressing-room that he was reminded of the words spoken by Offaly hurler Johnny Pilkington who, with characteristic bonhomie, had turned up at the winners’ hotel the night his team had lost the All-Ireland final.

Prevailed on to say a few words, Johnny did and rounded off a rousing peroration by urging Clare to “keep the bastards down!”

This exuberant reference to hurling’s elite became something of a battle cry for those counties striving to get out of the shadow of the game’s aristocracy and so Loughnane was happy to pass it on to a Kerry team putting their own crack, however short-lived, in the glass ceiling.

It highlights Offaly’s role as Spartacus in the hurling story. The county was the last (most recent) to win the hurling All-Ireland for the first time, in 1981. For most of us it’s a sobering thought that we probably won’t live long enough to see that happen again.

They rose by having to displace – in those pre-qualifier years – the provincial powerhouse of Kilkenny and mixed it with all the top teams, breaking the chains of the game’s hierarchy.

In the funereal aftermath of Offaly’s relegation to Division Two of the league the loudest laments concerned the final descent of a once great county – a drop-out from a cast that is already too small.

On RTÉ Donal Óg Cusack amplified the point about Offaly not really having an established tradition, their fortunes having thrived for only a brief two decades. On paper, it’s a telling point. Offaly won a first Leinster title in 1980 and reached their last All-Ireland final in 2000, in between winning four MacCarthy Cups, nine Leinsters and a national league.

You can’t entirely dismiss the 1960s and ’70s, however, as the county became a presence at the top of the game, competing with the best in the league and in 1969 defeating then All-Ireland champions Wexford in the Leinster semi-final to reach a first provincial final since the 1920s.

A first Leinster underage title followed in the 1970s when the under-21s were successful in 1978. In other words they had been paying their dues.

That’s important in the scheme of things because if you’re going to inspire others that won’t happen by inexplicably emerging; there has to be the struggle and mistakes and near misses that make success ultimately all the more worth valuing – and emulating.

In truth though, Sunday was just the latest in a sequence of last rites administered to Offaly hurling. Last summer the county lost its place in the MacCarthy Cup for the first time. Overwhelmed by the other counties and exhausted by an unforgiving schedule of four successive weeks, relegation to the McDonagh Cup was inevitable and last weekend’s nemesis Carlow took their place.

It could be a useful springboard. Winners and finalists in the second-tier championship get an immediate crack at the senior All-Ireland in the preliminary quarter-finals, which would extend their championship season beyond last year’s duration.

Realistically, however, it’s expecting a lot of a group of players who have had to come to terms with their part in the county’s very public failure to regroup, avoid demoralisation and knuckle down to winning a competition in which they have no wish to participate even though it’s a necessary rite of passage back to the top level.

A Carlow man present in O’Connor Park and witnessing his county’s miraculous resurrection from an 11-point deficit and early red card, made the point that it was almost tangible in the ground that what home support had mustered itself for the relegation play-off became nervous and panicky, creating a mood that appeared to spread like contagion to the players, long before the lead had been fully reined in.

For so long the Offaly story was a paragon of what can be achieved. A population that – even at its highest for 150 years – still hasn’t hit 80,000 sustained seven All-Irelands, not forgetting the three in football, in fewer than 30 years.

Maybe the generational quirk that saw three minor All-Irelands in four years during the 1980s prolonged the initial fairy tale but there must be regret that the success of the 1990s couldn’t have seeded more furrows for the future.

Denis Walsh, whose definitive account of the great rising of the 1990s, Hurling: The Revolution Years was published in 2005, noted in his introduction that “Offaly, proud tormentors of Kilkenny through the 1980s and ’90s have suffered their greatest ever humiliation at the hands of their old rivals. . . The world I revisited in this book seems a million miles away, almost a fantasy world.”

Fourteen years on and for all the vivid memories of Offaly hurling and the panache and style with which they played it’s as if it all never happened and Brigadoon has not rematerialised.