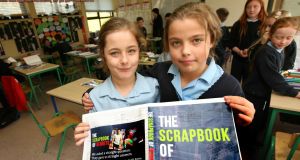 Twins Shayna and Orlaith Teggart, pupils at St Hugh’s National School in Dowra, with a proof of the cover of The Scrapbook of Regrets. Photograph: Brian Farrell

Temper tantrums, racist remarks and missed opportunities on the soccer field, are among the regrets shared by some of the GAA’s best known stars when quizzed by schoolchildren for a book to be published later this month.

Mayo footballing legend Conor Mortimer still regrets “throwing a Mayo jersey into the crowd” in what newspapers described as a show of petulance after he was substituted during an All-Ireland qualifier in 2002. Mortimer also told pupils from St Hugh’s primary school in Dowra, Co Leitrim, that he regrets never having won an all-Ireland medal.

When children from the two-teacher school wrote to more than 150 GAA greats and asked for their regrets, they expected to hear a lot of yarns about All-Ireland titles which got away. They got that, but much more as well.

Meath’s Graham Geraghty, who was at centre of a racism storm following an International rules game against Australia in 1999, told the pupils: “I called an aborigine player something I shouldn’t have. If I could turn back the clock to that moment I would handle things differently.’

Geraghty also said he regretted letting football rule his life. “I never went to college until last year,” he said. “So if I can give you any advice, it would be study hard, play hard and most of all enjoy life.”

More than 30 years after the so-called “game of shame” when Dublin beat Galway in the 1983 All-Ireland clash, Ciaran Duff still feels that being one of four players sent off, “spoiled the victory” for him.

Richie Connor, who captained Offaly in the 1979 Leinster final against Dublin, regrets that he was composing his victory speech on the field with minutes to go, because the Dubs snatched victory in the dying moments of the game. “I vowed I would never consider a speech before we won after that,” Connor said. And that decision was a cause for further regret when, three years later, Offaly scuppered Kerry’s five-in-a-row All-Ireland dream, and he had nothing prepared.

“We asked a straight question and we got straight answers,” said Padraig Kenny, principal of St Hugh’s , who was on the Leitrim county team that won the Connacht final in 1994.

The Scrapbook of Regrets is the work of first to sixth class pupils in the 43-pupil school and will fund an upgrade of their school pitch, which gets so wet that it is unplayable in winter.

The book will be launched by GAA president Aogan O’Fearghail at the old courthouse in Dowra on Sunday, November 22nd.

The Scrapbook of Regrets will be in on sale at 60 outlets and online at thescrapbookofregrets.com