Philly McMahon for player of year? He might very well deserve it 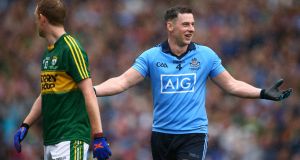 Philly McMahon is right: the conversation this week should have been about his success in keeping the most celebrated forward of his generation scoreless in an All-Ireland final. That it’s not is partly his own fault but he has already paid a high price.

The 128th All-Ireland championship began with the sparks and narks generated by the footballers of Tyrone and Donegal on a grey, wet May Sunday in Ballybofey and a hard rain was falling by the time the Dublin footballers paraded the Sam Maguire around Croke Park under floodlights. It was a grim summer and perhaps that influenced the view that this has been a drab championship too.

Whatever about that, it has been another sprawling, messy and epic season and was illuminated by moments of irrepressible individual brilliance. We shouldn’t forget those passages of splendour which, in turn, bring us to us to the question: who should be the footballer of the year? And if it is – as many privately believe – Philly McMahon, will he get a fair shot at the accolade?

Recall that day in Ballybofey. If you were to hold a secret ballot of the current cast of intercounty footballers asking them to name their best footballer in Ireland, there is a strong probability that Michael Murphy would top the list. His name was mentioned several times during The Sunday Games’ end-of-championship review – the 0-8 against Mayo in what was a listless quarter-final display by Donegal and the unusual combination of uncontainable power and grace in the flick-down to Ryan McHugh for the goal that sunk Galway in the game before that.

Murphy is the rarest thing in team sport: a player with such a range of technical and physical gifts that no one player can mark him. When the myth of Michael Jordan was still in the ascendency in late 1980’s Chicago – an unprecedented scoring sensation but still unproven in the gritty business of winning championships – Chuck Daly and the Detroit Pistons devised a defensive tactic, unofficially labelled the Jordan Rules, which were designed to break him.

Study the old Pistons’ tapes of the specialised attention reserved for Jordan circa 1989 and you are watching the origins of the kind of attention that Michael Murphy was afforded in the All-Ireland final of 2014 and, more explicitly, on that day in Ballybofey when Justin McMahon engaged in what can only be described as sanctioned stalking. McMahon sacrificed his own game just to get under Murphy’s skin, but it wasn’t enough.

Against Armagh, Murphy was nothing short of magnificent and he put Donegal on his back in what was a pig of an Ulster semi-final against Derry. His quietest day came when he was reportedly injured, in the Ulster final against Monaghan, a team against whom he inexplicably struggles. He went supernova against Galway and was lead scorer on the field against Mayo. Yet Murphy almost probably won’t win an All Star because his individual contribution has been drowned out in what goes down as a disappointing year for Donegal.

And he certainly won’t be mentioned in the conversation for player of the year. Murphy has been a senior footballer since 2007. That he hasn’t yet been awarded one POTY says everything about the scheme and nothing about Murphy. The Donegal man will be subject to the Murphy Rules every time he takes the field now and how Donegal respond to that will be critical their success in the future.

Too often, the POTY goes to a member of the winning All-Ireland team irrespective of the extraordinary influence a single player can have on propelling his team to exalted heights.

However, this season is one when the award should, without question, come from the champions. There is always something of the Oscar buzz about the POTY speculation, with performances in the All-Ireland semi-finals and finals often critical in burnishing the credentials of players.

It is a surprise here that there hasn’t been more made of the quietly excellent form of James McCarthy all summer. Cian O’Sullivan set aside his own play-anywhere instincts to bring a strategic and organisational presence to Dublin’s defence. Closer scrutiny of Paul Flynn’s season would highlight that he wielded far more influence than generally believed. The consensus is that Jack McCaffrey is the frontrunner for the award.

Philly McMahon’s name has not been as widely mentioned but there is no question he is among the players who have been excellent for Dublin all summer. The importance of McMahon’s contribution against Mayo was overshadowed by the head-butt incident against Aidan O’Shea, which received an intense degree of social and establishment media commentary but for which McMahon was deemed guilty of nothing by the GAA authorities.

His generally flawless All-Ireland final has been forgotten in the wake of Thursday night’s news that the CCCC is considering whether or not he should be face a disciplinary charge because of the so-called ‘gouging’ incident with Kieran Donaghy. The Kerry man said afterwards he had no wish to comment on it – what happens on the field etc. McMahon has come out and argued strenuously that what he did was not intentional.

Now, only McMahon knows the truth of that but it can be argued McMahon’s season has been irrevocably tarnished because both incidents have been subject to such widespread discussion.

There is also a covert acknowledgement that part of the appeal of Gaelic football is that it has a physical edge. What happens to players like Murphy during games is hidden in plain sight: defenders tricks which are sometimes referred to as the ‘dark arts’, off the ball and off the camera.

Not all defenders go in for that but, generally, defenders operate on the principle that they live in a fallen world and will do what they must to survive in it. And Gaelic football, more than most sports, has always treasured its hard men.

There is an abrasive edge to McMahon and he is unapologetic about it. But he also brings a terrific attacking instinct; he is smooth on the ball and has a limitless appetite for work. He has transformed himself into an exceptional defender who sometimes gives way to impulses which are threatening to eclipse the recognition of his talent. And McMahon has a relevant point when he says that the championship is littered with ‘incidents’. It is.

The peculiar thing about McMahon is that he doesn’t attempt to disguise his transgressions. That is how he ends up in hot water. McMahon is no angel. But the championship is choc-a-bloc with defenders – and forwards – who know well their own sins. The season closes leaving the uneasy feeling that McMahon has been held up as some kind of merchant in notoriety. If he is cleared by the CCCC, he will have been found guilty of nothing, but his reputation is left besmirched.

As it happens, the feeling here is that Bernard Brogan deserves player of the year, not necessarily because of the staggering 6-21 he scored from play but because he did it in a way that was almost unnoticeable. He has added a ferocious workrate to his game and plays with his head up all the time now, looking to bring others into it.

He led the Dublin attack all summer and is at the height of his powers. But it is a very close call, for McMahon’s influence on the season – from cornerback! – has been profound. McMahon is breathing hard down his neck – as is his form with marquee forwards. If there is no suspension, then as the tuxedos are brushed down for the GAA’s awards season, McMahon deserves to be in the conversation about the big prize.