Paul Earley calls for broadened use of black card 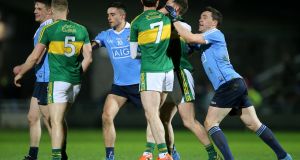 Stiffer suspensions, broadening the black card provisions and the introduction of a second referee are all ideas that Paul Earley believes would improve football.

As a leading member of the Football Review Committee, who proposed the introduction of the black card at GAA Congress, which was accepted four years ago this week, he is pleased with some of the progress made in the campaign against cynical fouling but believes other measures would be constructive.

The black-card requirement that a player guilty of cynical fouling must leave the field and be replaced has never been entirely clear of controversy but equally there has been no co-ordinated attempt to strike down the provision.

Earley says that the measure has been especially successful in curtailing the deliberate body collisions of the past, the taking out of a player showing for a pass or running support lines – a foul that is increasingly rare since the introduction of the black card.:

“There’s been an improvement in the third-man tackle, which was a blight on the game at the time. I would like to see all jersey tugging and pulling back being subject to the black card rather than specifically ‘pulling down’ an opponent deliberately. It would add some consistency to the current situation.

“There seems to be a mentality of giving away the free but getting a good belt in as well. In terms of the pull-downs the black card may need tweaking. We see pull-downs like Ciarán Kilkenny’s at the end of Dublin-Kerry – using him as an example; we see many of those, as the reality is players are taking one for the team because they’re not getting punished.

“I have suggested that the limit of three blacks in a season meriting a one-match suspension could be reduced to two and that might change behaviour. If the penalty isn’t serious enough you won’t change behaviour. In relation to a black card in the last few minutes when a team is on top, a player is willing to take it. The thought that one more could result in missing an important match might colour people’s thinking.

He also believes that there should be suspensions for accumulated yellow cards. At present, players can be shown a yellow in every match and not pick up any suspension.

“It should because consistent fouling of that nature – yellow card fouling – should result in a sanction, no doubt about it.”

Another initiative he’d like to see introduced is the use of a second referee in big matches.

“I’ve said for a long time that we need two referees on the field of play. It’s too difficult to keep up to the pace of the game nowadays and make good-quality decisions if you’re more than 20 or 25 metres away from the ball – and when there’s so much stuff going on behind the referee as well. It’s an absolute impossibility.

“It’s fairer on the players because it gives a quality of officiating that is capable of making good decisions on the spot and I think that’s the difference between going the extra distance to make sure that everything is done to the absolute best of our ability so that the players can play the game in the right manner and that referees are as close to the action as possible to enable them to make the correct judgement calls.

“People have talked about this in recent years but it hasn’t got much traction, which in my view is a pity.”

l  Dublin’s Lidl National Football League Division One match against Mayo will be played as first fixture on a double bill with the men’s AFL meeting with Roscommon on Saturday evening. It will be the first time that a women’s league match has been played in Croke Park and the throw-in will be at 5.0.

Dundalk fight back to earn a point but lose more ground 20:55
Caldwell’s 66 leaves him three off the lead at Celtic Classic 20:43
Bad light frustrates England as Pakistan hold out 19:31
Wilson holds nerve in tense last frame to reach Crucible final 19:23
Shane Lowry right in the mix at Wyndham after brilliant 63 17:48