Orla Cotter is pointing the way for Rebels 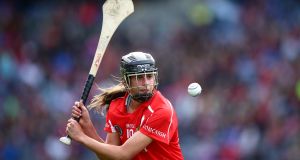 Orla Cotter has participated in 11 pre-seasons, 11 National Leagues and is now readying herself for an 11th Championship.

In that period, she has garnered five All-Irelands, four leagues and three All Stars. Yet she remains one of the lesser-spotted species, going about her business quietly and effectively, earning the admiration and respect of friend and foe alike along the way without media or many supporters noticing.

An Irish and PE teacher in Midleton College, it is only in the last couple of years, as she inherited the role of free-taker, that those outside of Cork in particular began to become aware of her. “I just play camogie. I’m not doing it for a profile” says Cotter, the ultimate team player.

“I suppose I only started taking frees in the last two years since Jenny O’Leary stopped playing. The free-taker sometimes gets a bit more glory than they should. Others often do the work for them. You’re just hoping they go over.”

The Ballynoe native’s technique might not be found in any coaching manual but it does evoke memories of Joe Deane, the hurling legend from nearby Killeagh. Left hand over right as a ciotóg but striking off her right side, it looks strange but the results are what matter and Cotter, like Deane, is razor-sharp from placed balls.

“I remember when I was playing under-14 with Cork, I used to catch with both hands and change my grip around but one of the trainers got me into the habit of keeping my left hand on top of the hurley so I would catch more with my right.

“The free-taking just happened as the years went by. You get used to something and if it keeps working, you stick with it.”

She doesn’t over-think the process. Although ensuring the stance is right and her hands loose, and visualising the sliotar clearing the bar and the umpire waving the flag, her confidence is derived from the homework done. Mentally, she puts much more into her general game.

Cotter was called into the senior panel in 2006 as a 17-year-old. The training regime put in place by former Cork star Fiona O’Driscoll under John Cronin’s management provided a huge eye-opener but the St Catherine’s sharpshooter loved it. Former heroines were now team-mates.

An All-Ireland/league double came that initial year and there were two more All-Irelands in the next three seasons. Then, what amounted to a famine by the Lee – five years in the wilderness before a return to the top table in 2014.

“When you win then, that makes it all the sweeter. It doesn’t happen all the time but when it does, you make the most of it.”

Despite the significant increase in the demands placed on an intercounty player since she started, Cotter remains hungry. Past success has never diluted that appetite. She will be 28 later this year but sees no reason to call time on her career yet.

“I’m a teacher and you’d have the summer off. For the last few years I’ve said I’ll take the year out but when it comes around, you don’t want to miss it. So you say ‘one more year’. We’ll see what happens. As long as I’m enjoying it I’ll keep playing it.

“It’s your choice to do it. It’s not a sacrifice. You do whatever it takes to be at the top of the game but you do need the hunger and desire. Otherwise you’re at nothing.

There is much talk of a three-in-a-row but Cotter’s policy of staying in the present means that it cuts no ice with her. Having been involved as Cork failed to achieve the feat in 2007 and 2010 might have something to do with that but in her eyes this is a new campaign, with everyone starting off on a level footing.

What’s more, with Limerick and Tipperary having such an impact in the league and Waterford’s ascension from intermediate making it an 11-team competition, this is probably the most competitive championship in history.

“Every year you go into it thinking from the league campaign that someone’s after improving. Last year Dublin came on and were a top side. Now you have Limerick and Tipperary, young sides coming through. You’d never write off Wexford, Kilkenny, Galway . . . it’s anyone’s game.