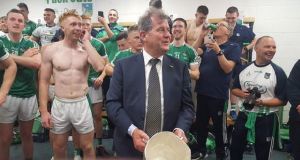 Limerick hurling’s sponsor JP McManus has donated €100,000 to every Gaelic Games county board in Ireland, to be divided equally among their clubs.

The leading racehorse owner has made the €3.2million donation following Limerick’s All-Ireland senior hurling triumph last month - explaining in a letter to each county board that his intention is to assist the continued development of Gaelic Games in the country. The news was first reported by RTÉ.

Limerick beat last year’s champions Galway 3-16 to 2-18 to win the Liam McCarthy Cup after a 45 year wait, and following the match McManus was lauded by players and the management team for his backing over the years. He was subsequently invited into the winning dressing room to celebrate with the Limerick team.

Following that victory McManus, who sponsors the team under the Sporting Limerick branding, explained the win had come about because of the county’s hurling academy which had brought players from grassroots level with the full support of parents.

He said the win was phenomenal and “life changing for some people.”

Asked which had given him more pleasure and which had cost him more money, the horses or the hurling, he replied “definitely the horses”.