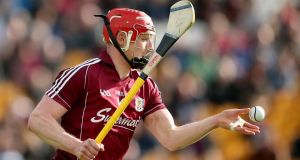 Galway’s Joe Canning: wasn’t at his best against Cork but will prove a major threat to Tipperary at Croke Park. Photograph: James Crombie/Inpho

I wonder what goals Galway and Tipperary players set themselves at the beginning of this season. The Tipperary hurling confraternity certainly were foreseeing a repeat of last year’s final with Kilkenny but with a different result this time. The wider hurling public, I think, imagined the same pair in the final but not necessarily a different result.

The players of the top six or eight counties would also have varying degrees of expectation before a league ball was pucked. After many balls were pucked in this year’s league the Kilkenny citadel seemed to be showing very telling signs of deterioration. But, whether consciously or otherwise, targets were set individually and collectively by the greatest hurling team of all time which to date have seen them defeating,trouncing, routing (choose your own verb) all pretenders to their crown, with relative ease.

When we really want to achieve something we set targets all the time but sometimes we’re not too aware of the fact that we are actually doing it. But are the targets specific enough to take us where we want to go? Do we commit them to paper ? Do we place reminders around our house and work space ?

I’m reminded of a conversation between Alice and the Cat from the book Alice in Wonderland.

Alice: “Would you tell me, please, which way I ought to go from here?

The Cheshire Cat: That depends a good deal on where you want to get to.

Alice: I don’t much care where.

The Cheshire Cat: Then it doesn’t much matter which way you go.”

Well respected S and C coach Mike McGurn has spoken many times about the present day overemphasis on training particularly in the gym. His view being that they are mimicking a training regime for professionals, but they have to go to work the next day. and that they don’t have sufficient time to recover.

“It goes against all science and smart methods of smart training,” he says. “When you are training you are breaking the muscles down. You develop when you are resting.”

Overall there seems to be belief that a winning team has done everything right and that their system should be copied. In preparation for this highly skilful fast game of hurling maybe there needs to be a reassessment by many (coaches, managements, players ) as to what is really important in preparation for the games.

The widely used goalsetting acronym SMART advises the goals need to be specific, measurable, achievable, results-focused, and time- bound. Every player needs to set his goals and work to develop himself. The team goals, though need to be agreed by all and realistic. Turning the pig’s ear into the silk purse might take a while as might the chance of donkeys winning derbies.

But the bottom line is teams need to be smart and work on the fundamentals that are necessary for their team and sport.

So what have Tipperary done this year to place themselves in a better position than this time last year. Of course I don’t know what they have done individually and I can only judge from what they present in their performances. Now that they’ve won Munster there is only one goal left but of course to achieve that the short term goals have to be attended to. What have they done to prepare since the Munster final ?

However they are back again in a position of power but of course all of the power is not in their own hands. Galway will have a big say on Sunday’s proceedings.

Over the years Galway’s goals have needed to be adjusted from game to game. Consistency isn’t a word one would associate with them. This year they have played five championship games but the mythical jury is still out on them. Galway certainly have improved though and have a very real chance of winning. Beating Cork by 12 points, having 23 wides with Joe Canning’s radar not properly functioning tells its own story.

There now has to be a confidence within as well as well as the knowledge that they could and should have beaten Tipperary last year. But games are won over the 70-plus minutes and Galway haven’t always stayed the full course of games. But they are improving incrementally.

So the scene is set. The goal-setting has played some role in bringing both sides to Croke Park.

The goals that are rewarded with green flags, though, will probably decide the game and I think the Tipperary backs will probably concede a lesser number.