Jim McGuinness: Munster replay will be shaped by team that learns most 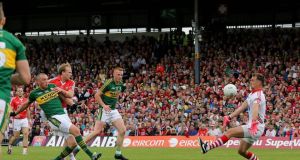 A really gripping Munster final in Killarney leaves both Cork and Kerry with everything to play for and a huge number of question marks hanging over both teams.

There is a tendency in the GAA to equate the idea of “question marks” with negativity. That’s not what I am implying here. What I mean is that the form and shape of both teams on Sunday makes the replay a really intriguing prospect.

What we can say with certainty is Kerry have a tradition of learning from games, feeding that information into their system and winning games on the back of that.

I am not so sure they will depart from their present system because they won the All-Ireland with it last year and it does ask questions. But it will be fascinating to see what they do for the replay. They may concentrate on improving on what they are doing at the moment rather than come up with something new.

Cork are still developing their structure. They controlled the game for long periods but need to make a few adjustments in order to win. It takes a long time to embed coaching patterns. And to beat Kerry, it will take a lot of work on the training pitch to deepen their understanding of what they are doing and to realise it is not just good enough to get the ball in to their full-forwards.

It is about the quality of the ball coming through and running at pace through the cover rather than just trying to play through it. There is a lot to pull together. But Cork have changed significantly after not showing their hand in the league. Both teams are strong at midfield and have very good forwards. So it is finely balanced.

This year in the league, Cork did something similar. They played a lot of open football and, in my opinion, disguised their summer intentions well. So it was going to be interesting to see what they would do for this game.

The build-up revolved around comments by Tomás Ó Sé on Brian Cuthbert, which caused a stir. The Kerry management and players distanced themselves from Tomás’s comments but it did seem to have an unsettling effect on Kerry. They spent a lot of time explaining themselves.

That said, I felt that there was significant pressure on Brian Cuthbert and his team going into the match also. The spotlight was on them to see if they could deliver and prove people wrong. It was an interesting dynamic. When you look at the quality of Cork’s players and how they set up, it sometimes seems they don’t ask enough questions of opposition teams.

They set about answering that on Sunday. The ball was thrown in and immediately two Cork players, Fintan Goold and Paul Kerrigan, dropped back to sweep in front of their fullback line.

I felt Kerrigan was a curious choice for that role. He is an explosive, dynamic forward who tends to take recovery time. A defensively-minded player who has perhaps been converted from the half- backs into the half-forwards might be better inclined towards that kind of task. Paddy Kelly’s entrance after Paul picked up his black card didn’t debilitate Cork’s cause at all. Still, I counted 10 turnovers by Cork in the first 15 minutes of the final. That was an impressive figure.

The disadvantage of that structure is that it leaves a huge space in front of the full-back line, which on Sunday comprised Marc Ó Sé and Shane Enright for long periods. I feel it asks a lot of questions, but it is a dangerous tactic too because if you can thread balls over that line of players, you have two on two inside and there are goal chances there. It is a matter of trying to exploit that gap and Cork probably have the forwards to do that.

So a major question is whether Kerry persists with that tactic. I do expect them to. That leads directly to the major question for Cork. Can they exploit it?

You need to be slick on the ball to cope with the pressure Kerry exert around that 45, but if you can pierce at pace, even one player carrying hard can take six or seven players out with one incision. And Cork got scores on Sunday by running from deep. Once they made that breakthrough, all sorts of options opened up for them.

Kerry were very aggressive in pushing up on the Cork kick-out. It was a high press up the field. If Cork emerge with the ball, the Kerry players are programmed to drop naturally with the ball and to put pressure on the ball as they retreat and to then settle around their 45.

So their pattern is to try and exert high pressure leading to middle pressure and then a line of men around the 45.

I am not so sure about the wisdom of that because Cork have very strong robust players in their back line in Eoin Cadogan and Michael Shields. We also saw the threat that Barry O’Driscoll and Kevin O’Driscoll presented when carrying the ball from deep.

When Cork’s ball carriers put the shoe down and break the first tackle, they can open up the middle third. That is what happened for Cork’s first goal. Cork worked the ball through the cover and once they got quality ball inside, the Cork forwards had the space – and quality – to create a very good goal. By my reckoning, Cork created 2-3 off their short kick out.

The key thing for Cork between the two games is about the quality of the ball going inside and the pace of the runners going through that defensive line. I feel that if they worked on nothing else it would be worthwhile because those aspects contain Cork’s best chance of winning the replay.

When Kerry ran hard at Cork, they made inroads as well. James O’Donoghue exploited slackness in the 18th minute and got a handy point. Cork’s system needs to be relentless because Kerry will punish any looseness. They are excellent at that.

Kerry absolutely have composure and good decision-making to fall back on. But Cork should be better placed to deal with Kerry’s running game because they have employed the double-sweeper system. In the example of James O’Donoghue’s point, once he turned and beat his man, one of two of the Cork sweepers should have been there to stop him at source.

There were a few diagonal balls too that broke off Kieran Donaghy. One led to Paul Kerrigan’s black card. The other led to Paul Geaney’s goal chance towards the end of the game. For both of those situations, the sweeper needs to be in absolute control. He is not fetching or marking so he needs to read the flight of the ball, the position of his team mate and the opposition player and where the ball is going to break. So the sweeper needs to be sharp and proactive rather than reactive.

That said, Cork have made significant ground tactically in just one performance. The thing is, Kerry will learn. I think Cork need to improve by the same distance again in order to win the replay.

Kerry were pinned to their collar for periods in the game but responded every time. There was some controversy over the team selection but those who came in from the bench did a very good job.

One thing that struck me about the Kerry midfield is that Bryan Sheehan and David Moran together are out and out ball players. Anthony Maher brings height and physicality and with Alan O’Connor back for Cork, there may be advantages to his inclusion the next day. Some of the Kerry point taking was of a very high standard.

In terms of the goals that Kerry got, the first one was a very good steal which Kieran Donaghy took full advantage of. However, the penalty was very soft. It would have been interesting to see what would have unfolded if those goals had not materialised when they did.

Both teams will want to avoid the final qualifying round, which is always a bit of a shark pool. It can seem like a long road back when you lose a provincial final.

So the next 10 days is not about fitness. It is about who can take most from the experience of the drawn game and reintegrate that into their plans. That team will probably be best placed to become Munster champions.