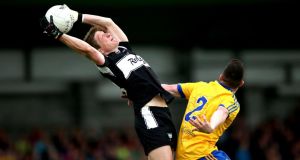 David Kelly, seen here getting the better of Roscommon’s Seán McDermott, was part of a two-man full-forward line for Sligo on Sunday. Photograph: James Crombie/Inpho

Sitting in Markievicz Park on Saturday evening brought to life this little debate I had been having with myself leading into the championship. I was wondering which counties might be best placed to cause an upset and challenge the established teams.

Cavan, Tipperary and Roscommon were the teams that were most on my mind because of their impressive underage record in recent years. Could they make a breakthrough?

So I was excited driving up to Sligo on Saturday afternoon. Roscommon had made significant strides, going from Division Three to Division One, were impressive at under-21 level and had developed some young, quality forwards. So I wanted to see how they would go.

It didn’t happen. Sligo stole the show in the things that I was hoping to see. And I felt that what Sligo did was a perfect illustration of why it has become so important for any team to have a system in place that the players understand and a game plan that works for them.

There are so many facets, from physical fitness and conditioning to the tactical side of things, such as the opposition’s kick-out strategy and their defensive system. And if you want a big performance you have to cover all of those aspects to a very high level. A huge amount of coaching can go into developing even one of them to the requisite level to be an All-Ireland contender.

What impressed me about Sligo was that they wrapped their system and game plan around the players at their disposal. So they had two players inside, one of whom, Pat Hughes, provided size and ball-winning ability and the other, David Kelly, who provided skill and agility. And it was great to see David back to his best.

The other two forwards at 10 and 12, Criostoir Davey and Neil Ewing were the lungs of the team, playing the prototype modern half-forward role. Similarly, they had terrific mobility in the middle of the park. I had heard about these two guys, just 19 and 21 years old, and going into the ground people were excited about the prospect of seeing them. Neither are tall for midfielders so it was going to be interesting to see if they would be able to cope with the size and physical strength of Roscommon in that sector and to establish themselves as ball-playing midfielders.

It seemed like a huge task but at the back of my mind I was thinking that Niall Carew wouldn’t be doing this if he felt they weren’t able for it. The six defenders, as far as I could see, were given a clear instruction to get the better of their men on an individual basis. They stayed very tight to their men. It was up to the two midfielders and 10 and 12 to fill the gaps.

Based on their age profile and fitness, they were more than capable of doing that. Then, at the bottom of the pitch, you had the goalkeeper, Aidan Devaney. I was very impressed with him. He brought a lot of variation to his kick outs and was very accurate and he constantly asked questions of the Roscommon midfielders.

The Sligo goal in the first half came from that: it was a really good kick out, even though Roscommon had pushed up. It was a diagonal kick out to the wing which was won and immediately kicked in on the diagonal, and from a shot that came off post the ball ended up in Ewing’s hands and he was brought down for the penalty. Sligo were very slick with their kick outs.

They ticked a lot of boxes by tailoring their tactics and strategy to the players they have available. The half forwards, in particular, played a critical role because it is not a very defensive system, so in order to mark as tightly as they did, the Sligo defenders had to know that they had the cover from 10 and 12. Once they succeeded in turning the ball over, they were in a good position immediately.

It was an example to all teams. Of the teams that are generally agreed to be leading contenders for the All-Ireland, it seems to me that Donegal are very far down the track in terms of understanding the processes that underpin their system and their game plan.

People talk about “playing Donegal at their own game” or “playing Dublin at their own game”, but the reality is that it is their game plan precisely because it suits their players. So it can be a difficult thing for other counties to replicate or imitate.

For instance, the only team to beat Donegal in the past four years in Ulster has been Monaghan. They have been compared to Donegal in terms of how they set up. But there is probably a solid reason for that.

If you look at Monaghan, they have similar players to Donegal. They have two top-level inside forwards with pace, power and size in Kieran Hughes and Conor McManus. They have defenders who like to defend and are strong and aggressive. They have a very skilful goalkeeper who can work a good kick-out strategy and kick points from long range. Their mentality is very similar too. There would be no fear of opposition teams. Monaghan bring a lot of those attributes, which is why it suits them to replicate the Donegal system. But it may not suit other teams.

And Sligo seemed to come up with a strategy to suit themselves and which asks questions of the opposition.

The last and most important thing in terms of championship football is attitude: hunger and desire. Roscommon didn’t have that to the same degree as Sligo.

If you have two teams that are very well matched and well coached and have all the training done, then it will come down to mentality. On Saturday night, Roscommon didn’t look as if they had the processes nailed down and they struggled to match the attitude of Sligo. I felt that you could see from early on that Sligo were going to win the game.

It is a big setback for Roscommon because you have to remember how hard they pushed Mayo last year. I imagine that John Evans will feel slightly hoodwinked today. I don’t believe it was complacency that cost Roscommon.

Sligo obviously got to see Roscommon play twice so they had the opportunity to reaffirm what they were thinking of doing. If you take that information back to your squad and you are 99 per cent sure that you know what the opposition are going to do in a given situation, you can talk with conviction and, in my opinion, that conviction can translate into belief.

That is what happened.

The trick now for Sligo is to be able to replicate that and to bring consistency. The question is now: will the same system prevail the next day? It is very difficult to get a high level of team-functioning across all the key areas.

That is the challenge facing Sligo now as they think about meeting Mayo. They have established a template but will it suffice? Will mobility in the middle of the park do the next day? There will be different challenges presented by Mayo.

In my opinion, if you want to be successful, the core principles have to be there 80 per cent of the time and then you leave 20 per cent to adapt and improvise according to the teams that you meet.

Whenever I was putting a system in place, I wanted something that you didn’t have to change and move all the time and yet which had the flexibility within it to allow for the different teams we would meet. The idea is that there are pillars there and they remain stable and constant and you look to strengthen those every night. They underpin a huge part of the game plan you devise to try to beat your opposition.

It worked wonderfully for Sligo on Saturday evening. Did we see the unveiling of a new Sligo system or was that a game plan just for Roscommon? That will become more apparent when we next see them play. If it is a system, will it endure? Will it be enough to prevent Mayo from a fifth Connacht title in a row?

That is the coaching challenge for Sligo now. And all managers and teams face similar challenges on training fields across the land.