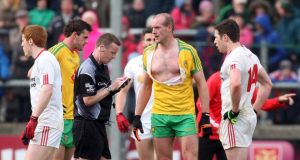 Sometimes, it’s easier to get a football team to a match on time than it is a car full of young children. Myself and Yvonne were probably the last people into MacCumhaill Park – between getting everyone mobilised and actually getting out of the house. We got parking no bother at Jackson’s Hotel and walked down to the ground.

It was a fair while since I had done that and it was really enjoyable, meeting the last few Donegal supporters still on the street. A few Tyrone people came over and said hello too and, even though the day was grim, there was a brilliant atmosphere.

If I was in any way apprehensive about how I would feel being there as a spectator, it went away immediately.

We stood on the terrace at the town end. Marty Carolan, the former Donegal player, was nearby and it was good chatting with him. The boys were already on the pitch warming up and from the minute I saw them, I felt very comfortable.

On Sunday evening, I was trying to figure out why I wasn’t craving it or missing it a bit more. One obvious reason is that my focus has been on Celtic all season. It might be more difficult if I was working in the county and seeing the players regularly and hearing the chat about the team all the time.

On Sunday, every situation in the game seemed like something I had experienced before. All the patterns and the twists felt familiar. So I felt relaxed being there as a supporter.

I thought it was a gripping match without ever getting the feeling that Donegal might lose it. The relationship between Donegal and Tyrone is fraught now. The whole thing has turned full circle.

For years, Donegal were under a compliment to Tyrone and didn’t believe they could beat them. They have clawed that back and are now in control of the dynamic.

So Tyrone are coming in with the mindset that they have to stand up to the challenge while Donegal are coming in refusing to be dominated. Nobody wants to give an inch.

As a consequence, the exchanges become frayed and there can be a real edge there. It is up to Tyrone to turn the tables again and I felt they didn’t quite bring enough to do that on Sunday.

I felt they carried their league patterns of play into the championship and didn’t bring that extra dimension with them. I felt they didn’t come into Ballybofey with the mindset to dismantle Donegal.

Darren McCurry’s goal gave them a confidence surge and they began getting hold of breaking ball and kicked some really fine scores.

Tyrone are so well coached and are patient and their running game worked. Peter Harte and Mattie Donnelly were terrific. They played with a lot of width and retained possession well. But they lacked a point of reference at the top of their attack. I thought that could have been another string to their bow.

The Donegal defenders knew that they were facing a running game all the time and prepared for that.

You could see the slickness return to Tyrone after they went two points up but in reality it was short-lived.

Martin McElhinney’s goal and Colm McFadden’s point were killer blows. It would have been a huge boost to Tyrone to be sitting in the dressing room two points up at half-time and may have shaped the second half differently.

I expect to see Tyrone in the All-Ireland quarter finals and I wouldn’t be surprised to see them in the last four. If they are given space they will do damage. I felt that their two U-21s who were brought in struggled with the pace of the game and that possibly is a sign of the challenge that Donegal present.

I was surprised when Tyrone went man-to-man all over the field because there were times they left gaps which maybe Donegal could have exploited more.

The point that Christy Toye scored when he got the dink ball inside is an example of this. But I felt it was a dangerous strategy for Tyrone. When you go man to man like that, you are then leaving it to the opposition to form your defensive structure. And that is how Donegal picked off a lot of their scores.

Looking to take Michael Murphy out of the game was obviously a key part of the Tyrone game plan. It was clear that Justin McMahon was there to do a very specific job and he ignored what was going on within the game to give his full attention to Michael. This can be very psychologically intimidating. But it didn’t surprise me. A lot of it was borderline, and the boundaries between foul and no-foul became blurred. It was very calculated from Tyrone. I felt Michael was exceptional in his ability to retain his discipline and showed his class in the face of the psychological challenge presented to hit 0-3 late in the match.

I felt it was a good move by Donegal to put Michael inside just after half-time because of the attention he was getting.

But the problem was that Donegal didn’t get enough quality ball into him. If Donegal had managed to isolate Michael and play a bounced pass for him to run on to, I would bet on him to win that race.

I felt there was an opportunity to expose the one-on-one match-up inside because the other Tyrone defenders were pretty much man-to-man. I thought that Michael tried to make himself available to receive possession as much as possible.

But when you are showing for the ball and you have a guy constantly pushing you back, there are only so many times you can do that.

In the circumstances I thought he did as well as he could have. Michael will learn a lot from Sunday.

And it is a challenge for the management too because Donegal have to try and find a way to cope with that tactic and maybe manipulate that situation to their advantage.

Ironically, the loudest cheer of the day came when Justin McMahon was yellow carded.

For me, that just shows how important Michael Murphy is in the minds of Donegal supporters – and that they felt he possibly could have been given more protection by the officials.

The person from the match that I would single out is Frank McGlynn. He was absolute gold. He kicked the opening point, made the goal for Martin McElhinney, made the incision for Paddy McBrearty’s goal chance and Karl Lacey’s point.

He has pace, skill, balance and intelligence, is direct and is very easy on the eye.

He consistently punched holes in Tyrone’s drift defence along the 45.

Colm McFadden excelled in his role playing deeper out the pitch. Martin McElhinney was a huge plus in the middle of the park.

Michael Murphy’s last point was a thing of beauty.

All in all it was a very solid performance by Donegal and it felt like the beginning of a new era. Their next game against Armagh will no doubt be a heavyweight affair and I’m sure will present a new set of talking points.