Wexford bury Kilkenny with wind at their backs 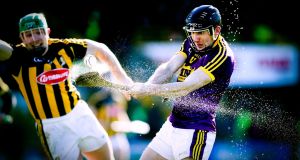 This is not a pursuit for serious folk. If mad dogs and Englishmen go out in the midday sun, what does it say for the rest of us, the perished gobdaws sitting in Wexford Park as a monsoon riddles us with bullets of sleet? And if you wouldn’t put a cat out in it, what have hurlers ever done to deserve this?

Wexford came out best from a wretch of a game that told us precisely nothing about what the rest of the year holds in store. The conditions turned this into a freak show and extrapolating anything of importance from it is pointless.

You might, for example, note that Kilkenny scored just two points against the wind in the second half and surmise that they lack a certain amount of stomach for the road ahead. Be assured that this proves nothing of the sort. Truth is, Wexford hit warp-speed with the wind at their backs, Eoin Murphy couldn’t get a puck-out to go past the 45 and the Kilkenny management had a weirdly passive day on the line. Will any of those three factors pertain come championship? Doubtful.

Wexford survived the concession of a goal with the first attack of the game and came back from eight points down for the second game in a row. It means they have turned over big leads now against both Kilkenny and Tipperary in games that turned into dogfights. So whatever their limitations - ponderous starts, a full-forward line that doesn’t feature often enough or heavily enough - they don’t want for bottle.

But again, though we know that will be currency in the summer, we don’t know yet what sort of buying power it comes with. Davy Fitzgerald doesn’t either but he’ll take it when it’s going. They have Galway in the quarter-final and he’ll find a bit more out there. May and June are when he’ll know what’s worth knowing though.

“I heard this rubbish on the radio last night and it saying I’m mad to win the league,” Fitzgerald said afterwards. “I couldn’t give a f**k, right. I just want to win every game I can win, right. If we happen to win stuff, fine. If you ask me personally, I’d prefer to win the All-Ireland, that’s what I’d love to win and if the Leinster Championship comes, great.

“If I was targeting the League, why would I have used 26 different players? I’ve given starts to more than Kilkenny have. I’m blooding lads and giving them a go. Trust me, if it comes and we’re there, brilliant, but I want our lads to be competitive in the summer.

“Okay, we beat Kilkenny by seven points today. What way do you think [BRIAN CODY]is going to be next door? He’s going to be chomping at the bit to go for it in June. He’s going to be absolutely coming with everything. I’m really excited by that prospect. Being a hurling manager involved with a team like Wexford, you want Kilkenny coming at you 110 per cent. And they will be. They’ll be up for it way more. They’ll have their Ballyhale players back. Listen, the Leinster championship against Kilkenny will be special.”

Kilkenny weren’t on it in any true sense here. Liam Blanchfield’s early goal was an untidy affair, batted home after Ger Malone found an acre of space down the middle of the Wexford defence. But instead of blitzing Wexford and putting all notions of a result out of their heads, they seemed content to stand off and allow the conditions do their dirty work for them.

They didn’t push up on Mark Fanning’s puck-outs and instead allowed full-back Darren Byrne free rein to come running out with a handy one each time. And though they turned him over a couple of times for handy scores, it seemed curious that they never got right up in Wexford’s grill when the wind was such a factor. They led 1-10 to 0-8 at the break but Wexford’s jugular was perfectly intact. This was not championship-grade Kilkenny, on the pitch or on the sideline.

When the tables turned in the second half, Wexford allowed Eoin Murphy no such latitude - hence the sight of the sweetest-striking goalkeeper in the country barely able to launch the ball 50 metres. Lee Chin thundered into the game along with half-time substitute Diarmuid O’Keeffe and Rory O’Connor started landing bombs from all angles.

Like any game played in a gale, by the end it was sheer momentum that buried Kilkenny. When Cathal Dunbar swept in a late goal after a scramble in the Kilkenny square that was that.

Time to get inside somewhere warm and on the outside of something hot.