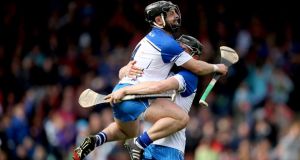 Waterford’s revival is complete. As Derek McGrath would say afterwards, the Déise fans do not scoff at days like this. And rightly so.

Just a year after a punishing league and championship, the De la Salle teacher masterminded a wonderful spring coup which helped an honest group of young hurlers land the third league title in the county’s history. They made easy work of a Cork side that could not tap into their freewheeling game and had the luxury of enjoying the last five minutes in Thurles.

It finished 1-24 and 0-17, Cork giving up the ghost after Tom Devine’s 63rd-minute goal trickled impudently into the Cork net. It was a day of huge vindication for McGrath, who went his own way with selection and strategy and then had the courage of his convictions to face down all protests. Everything went perfectly, from big Maurice Shanahan causing havoc in the Cork full back line to two critical saves by Stephen O’Keeffe and Devine’s game-breaking goal just three minutes after his arrival.

It was as much as they could have dared to hope for.

“You’re always waiting for a flat day,” McGrath admitted. “Deep down you’re fearful that flat day will come today. There was definitely more emotion in our build-up. In our own family environments, they acknowledged that, that if they could transfer all the emotion into adrenaline and energy, we’d be in a good place.

“That’s what happened. That’s hard psychologically for any group of young men, to bring the emotiveness of home onto the field. That was a big factor.”

“It would be unfair to single out an incident as a sour grape. The defeat was comprehensive. We will take it on the chin. What I am most disappointed about – and the players – is the level of our performance.”

And it was true. Cork flourished briefly just after half-time, landing three points from play in five minutes but it was clear that Waterford’s intent was not going to pale here. It was epitomised, just after that Cooper wide, when Aidan Walsh claimed a puck-out only to encounter a ferocious defensive unit in Kevin Moran and Jake Dillon, who smuggled the ball away from him.

Once in possession, the Waterford men were always looking for the big frame of Shanahan inside. Some balls found his paw. Many more went astray. But Waterford didn’t quit. Feats of individual fearlessness lit up the day – Kevin Moran’s driving solo score, Michael ‘Brick’ Walsh’s celebratory point. In the stands, the Waterford fans were delighted. Only 17,559 paid in – modest in comparison to Waterford’s last league success in 2007, but still a bigger crowd than Vegas’s fight of the century.

McGrath never quite relaxed but the strangest sensation for him was feeling that warm afterglow of public delight.

“That was very difficult for me to overcome because I would have been naturally sceptical of fans having watched fans applaud decisions. One day I was sitting in the stand and Dan [Shanahan] was taken off and a fella beside me stood up and applauded and I would have been naturally sceptical or paranoid over how harsh it is for people with their families in the stands.

He knows they are far from finished and expressed the hope that in a few seasons time, Waterford will be out to demonstrate that they are “capable of flamboyance”.

On Sunday, nobody from Waterford much cared about that. Their team started winning in February and haven’t stopped. Their spring has been an unexpected delight. Cork and Waterford will meet again in five weeks’ time and the stakes will be higher. But that is a different month and a different competition. Add 2015 to 2007 and 1963 for significant national silverware for Waterford.

Nobody saw this one coming. Nobody can say it isn’t full deserved.