Waterford’s Shane Aherne quite happy to speak about ’98 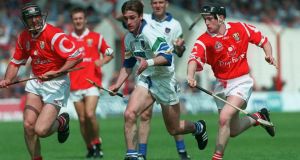 It doesn’t feel like 17 years ago but Cork and Waterford return to Thurles for a hurling league final for the first time since 1998. Cork were building in Jimmy Barry-Murphy’s first spell managing the county and, three years in, would win that year’s league. A year later the All-Ireland followed.

Waterford were on a different cycle, not unlike the current team, although the county had been waiting longer for the sort of success that eventually came their way in the decade that followed.

It was the second year of Gerald McCarthy’s management. The former Cork All-Ireland-winning captain and coach was instilling the values of discipline and industry in a team that was made up of promising players from two successful underage teams from 1992, the All-Ireland under-21 champions and Munster minor champions.

“I was there with Gerald in 1997 and the thing I remember was the amount of work we did. I think we were a bit unlucky that year but we kept at it in 1998. There was a strong emphasis on discipline, plus a lot of tough training, weights and then hurling sessions. We might go to the sand hills in Tramore, so there was a lot of work going on.

“Plenty of people didn’t see it coming from us, but we did. There were good players like Ken McGrath, Dan Shanahan and Stephen Frampton coming through, as well as the under-21s that won the All-Ireland in 1992 – like Tony Browne and Paul Flynn. So we weren’t shocked by the breakthrough, which probably came in the league semi-final against Limerick. ”

At the time Limerick were the league holders and also had beaten Waterford in the 1997 Munster championship. Aherne says that the atmosphere of the times, with new All-Ireland winners emerging, had been a great encouragement.

“Waterford hadn’t done much at senior level for a good while but all around us were counties who were coming, like Clare and Offaly and Wexford. We had played against all of those at underage and wouldn’t have been afraid of them – we’d a great win over Clare at under-21 the year we won the All-Ireland.

“The players were open to new ideas. Gerald was strong on discipline and players were punished for breaching it. A lot of fellas were disciplined so everyone could see there would be no exceptions.”

The league final was very competitive and although Waterford were underdogs they were just two adrift at half-time and level going into the final quarter. A goal from Alan Browne pushed the match in Cork’s direction and they pulled away to win by seven.

Waterford weren’t unhappy at their showing and curiously the line of their graph that summer would extend farther than Cork’s. Barry-Murphy’s side had recorded a big win over All-Ireland champions Clare in the league semi-final but were caught by the same opponents in the Munster semi-final some weeks later.

Aherne said that Waterford would learn from Cork’s fate when they faced Clare in that year’s memorable and controversial Munster final, which went to a replay.

Waterford’s low trajectory was despite a semi-final win over Tipperary, who had been the previous year’s All-Ireland finalists. It was a hugely significant win, according Aherne.

“I remember that so well. I was nearly crying. I would have played on teams that had beaten everyone but we could never beat that Tipp team under Babs Keating. So it was huge for us.”

Aherne is positive about the current generation although he has reservations about the playing style that has seen Derek McGrath’s team deploy a very deep defensive cover, which has proved effective in getting out of Division One B. They have also defeated two Division One A teams, Galway and Tipperary – after shipping two goals early in the match but never losing their nerve as they responded to beat the favourites – along the way to Sunday’s final.

“I know Derek very well and I’ve great time for him, although I’m not a huge fan of the defensive style. But to be fair, nearly every team seems to be playing it to some extent. It’s great for Waterford though as a young team. I remember when I was playing in the mid-80s, we beat Cork in a Walsh Park in a league quarter-final – and the confidence we got from beating Cork in a knockout match . . .

“They trained in my club in Ferrybank last weekend and you could see the excitement and commitment just looking at them. One difference is that there were flags all around the place in ’98 but that was just the start of things and the start of the Celtic Tiger. Different times.”