Unease stalks Clare and Limerick ahead of qualifier clash 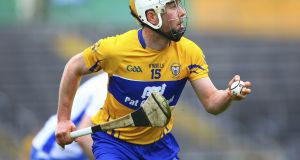 Unease stalks this fixture. Clare must feel the anxiety of having bombed out of the championship yet again and finding themselves once more in the minefield of the qualifiers.

Against that is the evidence that the team has looked improved so far this year despite losing the Munster semi-final to a formidable Waterford side with all of the motivation of having lost the protracted league final.

None the less they are expected to field without their exceptional forward Conor McGrath, who is nursing an injury and that is cause for further nerves given that his absence from last year’s fixture between the teams really debilitated Clare.

Yet underneath it all is the reality that Limerick are not in a great state. A listlessness marked their display against Tipperary when they managed to be out-scored for nearly an hour by 14 men - until the injury-time goal made a late but irrelevant indent in the margin.

Whereas Clare were putting 35 points on a game but out-gunned Laois side, Limerick dispatched Westmeath by just a quarter of that margin albeit down to 14 men for most of the match.

One of the recurrent themes in this rivalry is the indiscipline. There were two players sent off in last year’s championship match and in March Limerick lost Barry Nash just before half-time to a second yellow.

Clare’s defensive discipline has improved this season and that will help, as their concession of twice as many as Limerick a year ago was happily capitalised on by Shane Dowling.

Overall, attention to defensive detail has been better with the backs, led by Cian Dillon, in good form and if the key to losing to Waterford in the Munster semi-final was their opponents’ appetite for ball in the crucial middle third of the field, Clare are unlikely to lose out in terms of appetite on this occasion.

They also have David McInerney back in harness, which further strengthens the defence.

Despite all these straws in the wind David Fitzgerald and his management will be cautious. Matches between this pair of neighbours have rarely gone predictably and there is the precedent of just last year when favourites Clare were beaten by a point.

The League winners are desperate to get back to Croke Park, the venue they haven’t seen in championship since winning the All-Ireland three years ago, but they won’t take anything for granted. They should however be too good for the stuttering opposition.

Just the ticket: All tickets €25 and under-16s €5. €10 concession for students and senior citizens available.