To say the 125th GAA Munster hurling final was nondescript isn’t to belittle a competitive encounter in which favourites Tipperary pulled away at the end to confirm a 41st provincial title and a first for Eamon O’Shea’s management.

It simply describes the impact on public perception of the two counties’ standing, as the hurling championship is whittled down to the last six. Tipperary were clearly better and deserved their five-point win but there were lapses in concentration along the way that will have vexed O’Shea but equally leave good room for improvement before next month’s All-Ireland semi-final.

On the plus side, they negotiated Waterford’s defensive system and did so with sufficient initial comfort to look in the first quarter like they were going to provide a sharp definition of its shortcomings.

Waterford although they lost their unbeaten record in this year’s league and championship, did enough to indicate that they can go into the All-Ireland quarter-final against Dublin in two weeks with legitimate hopes of making the last four for the first time in four years and with a greatly rejuvenated team.

They came back strongly in the second quarter, maybe through a gate left open by some complacency on Tipperary’s part.

Apparently well on the way and twice leading by four points with no wides recorded, Tipp got careless and began to drop ball or misdirect passes and Waterford, who to their credit hadn’t been unhinged by early adversity - including Maurice Shanahan’s missing a straightforward free - surged back into the match.

Austin Gleeson struck over a whopper of a free to start the comeback - having been just wide with one of his characteristic inter-continental strikes just previously - and Shanahan quickly atoned for his miss with a point quickly afterwards. 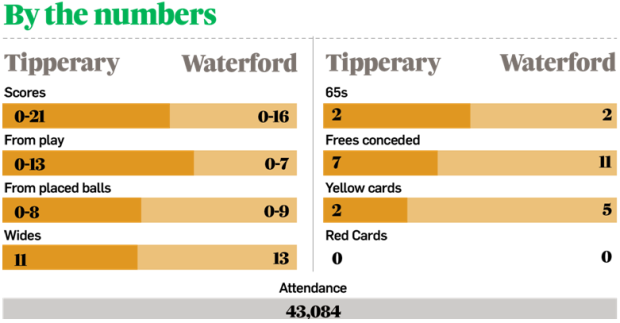 Pádraic Maher, who was in his element for much of the match as Tipperary’s spare man, was also the most careless of the defenders during the this period and fouled Kevin Moran, who was the leader of the Waterford resistance at this stage, after turning ball over to him in the 23rd minute. Shanahan pointed the free and immediately availed of another give-away to equalise at 0-7 each.

The sense that Tipp just needed to re-focus to re-assert themselves was confirmed when after Moran had put Waterford in front, Michael Breen and Séamus Callanan restored the lead before half-time - not a great outcome for a half that had started so well but not bad considering the second-quarter drift.

in which Tadhg de Búrca was again exceptional as the sweeper - and unusually for him these times he finished with nothing from play in his tally of six points. He still worked hard and in the decisive final 10 minutes tracked Colin Dunford all the way back to own defence and dispossessed him.

John O’Dwyer initially had a serious contest with Noel Connors but Tipp have come to rely on him for more than lively jousts and the switch out the field freed him up for a very influential second half.

Lar Corbett made his first appearance of the summer at the start of the second half and although he took a while to get into proceedings his 61st-minute point, conjured out a quick grab and steepling strike, was the sort of economic score that Waterford couldn’t quite produce.

As the half wore on they became tired and slightly ragged looking, hitting eight wides, as they pedalled furiously to stay in touch as the deficit began to stretch in the later part of the match.

Jason Forde had opened the half with a point to extend the lead to 0-11 to 0-9 and although Waterford equalised, Niall O’Meara clipped over the lead point a minute later and Forde followed up immediately by punishing a poor clearance to restore teh two-point lead.

The impression was that errors were creeping into Waterford’s play but they still pressed with what energy they could muster. Colin Dunford, whose penetrative runs were carefully tracked by Tipperary, gave Pádraic Maher the slip and drew a save from Darren Gleeson for a 65, converted by Shanahan.

Jamie Barron, another of the livewire runners, made a slalom of a run through the Tipp defence, showing skill, poise and pace, but it was as if he was knackered when the time came to shoot.

Tipperary raised their game in the final quarter, which they won 0-8 to 0-4, and transformed an edgy one-point margin into a five-point win. Three points from O’Dwyer and a scattering from other forwards, Corbett, Patrick Maher, replacement Shane Bourke and a 65 from Callanan.

So without being a candidate for one of the great Munster finals, the match had at least delivered an interesting tactical contest between two teams who will have more to say later in the summer.

Tipperary probably felt more urgency about the outcome than a Waterford team that has already done so much in effectively its first year - allowing that they have by all accounts become sick of the cliché that they now inhabit the happy land of ‘bonus territory’ - and the provincial trophy is a milestone - but not as they’ll be aware, a destination.

Eurozone 2020: Gareth Southgate gets a message from above

Is the Koepka-De Chambeau rivalry all it seems to be?

Jim McGuinness: This could be Patrick McBrearty’s year

Johnny Watterson: The Olympics are in the starting blocks and it looks like a ‘go’

3 Is the Koepka-De Chambeau rivalry all it seems to be?

Eurozone 2020: Gareth Southgate gets a message from above

Is the Koepka-De Chambeau rivalry all it seems to be?

Jim McGuinness: This could be Patrick McBrearty’s year