Tipperary face Cork as blue-bloods get ready to dine 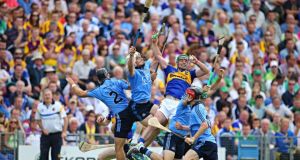 Prepare the good room, unpack the best china. The hurling championship has four teams left and it’s blue-bloods only. No riff-raff, as Basil Fawlty would have it. In all the live-long history of the GAA, Tipperary and Cork have never played out a championship game in Croke Park. Better get the feather dusters out on Jones’s Road.

Tipp came through their All-Ireland quarter-final in Thurles yesterday with uncommon ease, running out 2-23 to 0-16 winners in front of 43,088 paying guests in Semple Stadium. They weren’t as slick as they’ll need to be when Jimmy Barry-Murphy’s side lock antlers with them in three weeks but they had all the class required here. It wasn’t much of a game but it was a win that never looked like being anything else. It was enough.

For once, it wasn’t their forwards that stood out. John O’Dwyer scored 2-2, Séamus Callanan nailed all but a couple of his frees, Lar Corbett’s day started with a couple of glorious long-range points before fizzling out.

But in general, it was their defenders who starred. Pádraic Maher was phenomenal at wing-back and cleaned Conal Keaney out of the game. Shane McGrath wasn’t far behind him, James Barry and Brendan Maher caught the eye as well.

Eamon O’Shea revelled in the fact that it was his lower-numbered players who deserved the plaudits but still couldn’t shake the feeling that the game and the performance could have been better.

“We just need to move the ball a lot quicker. We would certainly have to move it quicker to stand a chance of competing. My honest assessment is that we’re coming in and we have the work to do to catch up. In the longer term form over the last four or five weeks, Cork are ahead of us. It’s not as grave as some people make out. Certainly winning games gives you something to take out of it.

“It’s been a joy working with them for the last two or three weeks, to see them move the ball. It didn’t happen today as much as you would like but Dublin had a role to play in that. Dublin are a formidable team, with a fantastic manager. In terms of what he’s done, he’s been my outstanding manager over the last number of years.

For Dublin’s part, this was the latest in a series of displays that appear custom-fitted to break Anthony Daly’s heart. His sixth season with Dublin ends with hurling in the city inarguably in a better place yet at the same time with him personally no closer to getting the rock rolled up the hill. They went out at the quarter-final stage in his first year, they’ve only once made it further than that since.

Inevitably, he got the question afterwards. Daly has been around long enough to know it was coming and to know how to fend it off. The future will bring what it will bring. It just was never going to bring it yesterday.

“I’m a good while there now,” he said. “I don’t know. We would have to give it long, hard thought. I suppose everyone involved in that dressing-room will be thinking about that. You come into a game like today’s and you’re not thinking like that. You’re thinking about how we’re going to win the game. That’s the full focus.

“We won’t make decisions like that now. We’ll take a few weeks now to clear the head and think about things and evaluate the situation and that’s what I’ll do.”

Whether he stays or goes, Dublin are the better for having had him. If he leaves, he leaves a sport improved.

“Yeah, look, the minors were unlucky enough today. They were there or thereabouts. The under- 21s were in the Leinster final as well, minus all the lads that went at minor level. Four of their forwards from that minor team went off to play football.

“What do you do, like? Do you give up and leave it to football? And everyone concentrate on winning All-Irelands? Or do you keep going? And I’d like think they keep going.”